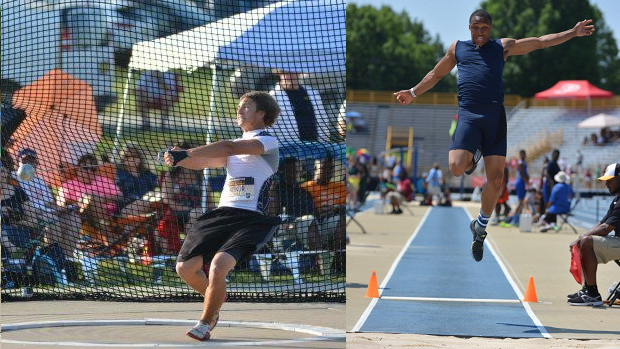 Two of North Carolina's best established themselves as contenders for best in the nation in the 2014 season.

Every summer, athletes from North Carolina get the opportunity to expand their horizons by traveling to AAU- or USATF-sponsored events.  Even the average club-team member can end up in Illinois or Florida, participating in what amounts to huge invitationals (although they are also billed as championships).  The most talented have a chance to earn a spot on teams traveling abroad, either sponsored by organizations like NSAF or as official members of Team USA in world competition.  This summer, two of the biggest summer track events are within North Carolina's borders: the Russell Blunt East Coast Invitational (this weekend in Durham), and the USATF Junior Olympic National Championship (next week in Greensboro).  Before the nation decends on us starting Friday, however, athletes have been representing our state well in diverse competition around the country, including two major meets in the past week.

The two athletes that got to travel the farthest this summer were Colin Minor (South Brunswick) and Isaiah Moore (Cummings).  They qualified for this Under-17 international competition through separate events at USATF Nationals in Illinois at the end of June, and both of them performed very well while representing both our state and our nation abroad.  Isaiah had a legitimate breakthrough meet, rising to the competition with huge PR's in the long jump (7.53 meters or 24' 8.5", US #10) and 110 Hurdles (13.66, US #5 and NC #5 all-time).  Colin, throwing the international 5-kilogram hammer instead of the 12-pound one we use for high school competition here, made the finals by heaving it 234' 7.75".  Both of these athletes will be back for one more year of high school competition, and you have to believe that this kind of experience, along with the success they were able to generate, will only serve to boost both boys' confidence and motivation.  If the season ended right now, Colin would be the top returning hammer thrower in the country, while Isaiah would rank 2nd in the long jump and 3rd in the hurdles.