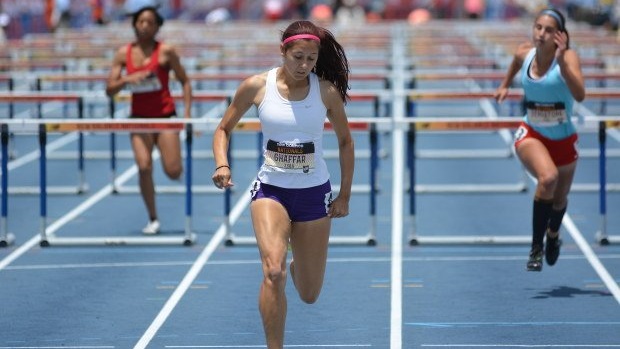 One of the most versatile athletes in state history concluded her career with a silver medal at New Balance Nationals.

I have had a personal interest in the mutil-events (heptathlon, decathlon, etc) since I was privileged to coach a very versatile athlete several years ago.  Although they may be the purest measure of outright athletic ability in our sport, they often seem to receive the least attention, often being relegated to their own day, and squeezed between "higher profile" events when not.  Often dismissed as being for athletes that cannot compete at the top level of one event (the "jack of all trades, master of none" syndrome), heptathletes are usually quite the opposite: very strong in one event, but yet versatile enough to do well at others.  It takes great dedication (and long hours of practice) to become even moderately proficient at 7 or 10 different events, and requires the ability to shift mentality from event to event.  Aminah Ghaffar is best known for her hurdling, but she is a great enough all-around athlete to score well in the long jump, shot put, javelin throw, and 800.  Her total of 4582 points is the best for a North Carolina girl in the last four years, and she has enough talent in the long hurdles to carry that to college, as well.  Aminah was a blast to talk to; she is open, engaging, and funny, and I am sure that will make her a centerpiece of the ECU team next year.