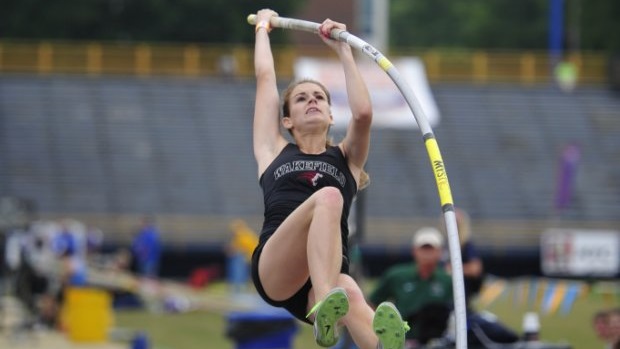 Kristen Lee might have the best chance to bring home an individual national title, although NC can field some pretty tough relays.

As the Championship events heat up, North Carolina's best will be on the track attempting to rise to the challenge.  Saturday holds an interesting mix of events: Championship and Emerging Elite, individual and relay, plus lots of field events.  One of the most interesting story-lines of this meet: Ama-Selina Tchume, who started the indoor season with Southeast Raleigh, has moved to Wakefield.  She had to sit out the winter and spring seasons as a consequence of her transfer, but since New Balance Nationals is not and NFHS-sanctioned meet, she does qualify to compete with her new school this weekend.

Trentavis Friday (Cherryville) gets another crack at national-caliber competition, this time with good weather on his side.  Friday will be looking to improve on his state-leading time of 10.37, and should advance to the finals.  Jahmaal Daniel (Terry Sanford) is second in the state, and he also has a great chance to advance.  Several of the other top sprinters in the state will be racing, including James Drummond (Lexington) and Cameron Stinson (Hickory), and many of them could run PR's and still not advance against a strong field from around the country.  On the girls' side, Jasmine Dawson (West Johnston) is the state leader in this event, but she will have to run well to make the finals.  Ama-Selina Tchume (Wakefield) is also entered, and will gain some valuable experience for next year, when she will be the top returning sprinter in the state.

The top three boys in the state in this event are entered: Isaiah Moore and Thomas Jones II (Cummings), plus Drew Barker (TC Roberson).  In addition, the state's only two girls under 14 this season, Mollie Williams (Clayton) and Anna Cockrell (Providence Day) will also compete.  As was the case in the boys 100 Dash, there are several girls in the hurdles that are among the state's best, but will have to have the race of their lives to make it into the finals.

I can't tell you how happy I am that North Carolina has some athletes in the steeplechase this year - last year, there were none.  Teammates Gabby Merritt and Clayton Wilson (Greensboro Day) will both run in the unusual event (at least, unusual down in these parts), as will Chilton Birwhistell (Middle Creek).

The routine should be comfortable for Wesley Frazier by now; after all, she has run the same three individual events (one per day) each year for the last three years.  This is the event she won in 2012, and it provides her with the chance for one of the few things she hasn't done in her career: repeating as outdoor national champion.  Malia Ellington (Community School of Davidson) will also compete, and she will be looking for something in the 10:30 range for a new PR.

Although none of North Carolina's boys teams are entered here, this event is loaded with top female squads.  You have to think that the addition of Tchume to Wakefield's 46.86 team makes them an overall favorite, while Southeast Raleigh and Parkland will be shooting to break 47 for the first time.

The Parkland girls have the top time in the state, and with the ability to focus their energy on just the relays the Mustangs could have more still to show.  Likewise for Wakefield, which hasn't really been able to load up this relay very much this season.  West Johnston's and Mallard Creek's girls will be shooting to achieve the rarefied air of the sub-1:40 club, which would move them into the state's top 10 all-time.  Terry Sanford and Southeast Guilford are the only North Carolina boys' teams entered.

There should be an interesting match-up between Wakefield's girls and their cross-town rivals, Sanderson.  If you compare the top 4 hurdlers from each school, Wakefield has an edge at 1 and 2, but Sanderson is better at 3 and 4.  Phillip O. Berry Academy is the lone boys' entrant from our state.

The West Carteret girls will step up to the higher level of competition here, and don't be surprised if that leads their two stars to produce even stronger performances.  Knightdale's boys have decided to focus on what they do best, and that includes this race, where they are currently ranked 21st in the nation.  Pine Forest is also in the race, looking for the sub-7:50 time that they nearly earned at the 4A state meet.

Bre'anna Warren (Western Guilford) takes her 154' 5" PR into battle against some of the best throwers in the country, though it will probably take 160' to make the podium.  In an interesting twist of onomastics, the other competitors from North Carolina are Brianna Heilsnis (Apex) and Bryanna Hames (Myers Park), both of whom are still searching for their first 140-footer.

Kristen Lee (Wakefield) is North Carolina's highest-ranked individual female in this meet, as she holds the 5th spot on the national listing.  Interestingly, only one of the four girls ahead of her in those rankings is entered this weekend, and that means Lee is a serious contender for the gold.  She will have a familiar opponent on hand in Rayna Yvars (Green Hope), who has cleared 12 feet several times and should be ready to move that PR up a few inches.

On the girls' side, Chelsey Hargrave (Williams) has her eye on the 40-foot mark, while Dejah Hayes (Western Guilford) leads three other North Carolina girls that would love to break 39 for the first time.  In boys' competition, Kimani Hoffman (Knightdale) has been stuck in the 46's for some time now, but the conditions and the competition should be good enough to carry him to a new PR this weekend.

Jalen Peterkin (Southern Durham) came tantalizingly close to throwing 60 feet at the 4A state meet, and now he gets another chance at it.  Chris Cubra (AC Reynolds) pulled out a PR throw during a state meet that did not go as well as he had hoped otherwise; if he can get his rhythm early in this competition, he definitely has 58-foot potential.

Colin Minor (South Brunswick) comes in  at US #4 in this event, and he is also #1 all-time for our state in the hammer, although the top two thrower in the nation are in this meet (and they appear to be in another category altogether).  James Rowland (Northside) is US #19 and NC #3 all-time here, and would love to close out his career with a 200-foot mark.

Sydnei Murphy (Apex) should be competitive in this race, although she may need to lower her PR slightly to make the podium.  Jaleesa Smoot (Salisbury) and Bernard Freeman (Knightdale) are also entered.

Mary Grace Doggett (Cardinal Gibbons) is probably fast enough to compete in the championship race, but has opted for this division, and that should make her a serious threat to win.  Emma Brown (Providence Day), Callie Wynn (West Davidson), and Allie Castro (North Lincoln) have all run right around 11:10, and could find themselves in the same group striving for 11 flat.  Nikolaus Kreiling (Jordan) and William Roberson (Broughton) will try to break 9:10 in this race, which should put them on the podium if accomplished.

Marcus Abraham (Metrolina Christian) and Elijah Mallory (Wakefield) are both 52-foot throwers.  While that will make them competitive against each other, they will probably need 53' - 54' to have a chance to earn a medal.

Elizabeth Olesen (Hickory Ridge) and Libby Florence (Cedar Ridge) have both been just a little off this spring from their PR's last year (5' 7" and 5' 5" respectively), but that would all get erased with a strong performance Saturday.  They will be competing with a bunch of 5' 4" and 5' 2" jumpers, including Makaila Roberts (Reagan) and three other North Carolina girls.  5' 4.5" won this division last year, so there's a good chance the gold will stay in the state, but early misses will be a big problem in such an evenly-matched field.