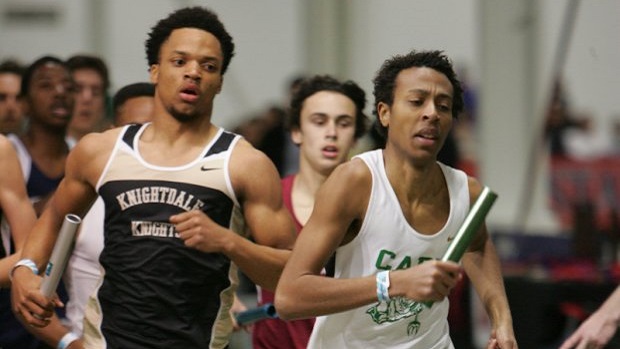 The 4x800 takes center stage for both boys and girls on Saturday, with Cary and Knightdale right in the middle of it.

County meets are always competitive, as long-time rivals square off for bragging rights until next year.  Only one county meet in North Carolina, however, also features national-level talent in nearly every event, plus remarkable depth.  The Wake County championship is younger than some of the other county meets, having started within the last few years, and therefore lacks the history of, say, Forsyth County's annual meet.  However, the event has grown to be one of the most competitive on the calendar, producing as many top marks as any invitational during the season.  Although there will be talent on display across the board at Athens Drive on Saturday, there are a few events that stand out:

It seems that most of the Raleigh distance powers have spread their athletes out, leaving some disappointing match-ups in the individual races.  The 4x800 looks tremendous up front, though: Cary ran in the 9:40's indoors, Southeast Raleigh ran 9:56 as the only team in the race last weekend, and Green Hope is always deep in distance runners.  Throw in a loaded-up Broughton squad that is just starting to hit their stride and it should be a great race.  Cardinal Gibbons appears to be holding some girls out of the relay (or even the whole meet), but they might still have enough depth to hang with the leaders, as well.  The 200 could be titanic, as Tyra Lea (Wakefield) faces a field that includes three other legitimate sub-25 sprinters: Layla White (Cary), Shakinah Brooks (Southeast Raleigh), and Tiana Patillo (Wakefield).  When you include the potential of Sydnei Murphy (Apex), then you get a really exciting race.  In the triple jump, Lea will face Southeast Raleigh field-event whiz Amara Bell, as well as K'Lynn Beal (Broughton).  All three are capable of 37 feet, although the cooler temperatures for an event scheduled at 9:30 AM could restrict those distances somewhat.

Other Stuff to Watch

White and Patillo are also scheduled to square off in the 400, where White has been putting up big numbers while not being pushed at all.  White got the last laugh during indoor season, beating Patillo for the title in the 500.  However, Tiana has been training for over a month without running a 400 yet this spring, and there is no telling how fast she can run.  And don't count out JeMay Ward (Wakefield) in the 400, either.  if anybody is going to dethrone the Wakefield girls in a sprint relay, it will most likely be Southeast Raleigh, and the two cross-town rivals with great histories will race at least three times between now and the end of the season.  Amara Bell will compete in the high jump, where she is the top seed, and the long jump in addition to the triple.  Speaking of the long jump, Brooks should have a good battle there with Tiffani Lewis (Millbrook).  Brianna Heilsnis (Apex) has been consistently strong in the shot and discus, and she should win both here, although she does have some competition in the shot.  Megan Sullivan (Broughton) has posted a 5:08 but is entered only in the 800 here.  Keep an eye on Rachel Bartolomeo (Cardinal Gibbons), who has been on a long road back from injuries that began during cross country season; if she is healthy and can get anywhere close to her times from last year by the end of the season, the Crusaders will be nearly unstoppable in the distance races.

Once again, individual distance runners have been spread out into different races, thinning out the talent in those events.  Once again, though, the 4x800 looks amazing, with 4A indoor champion Cary and current state leader Knightdale taking on strong teams from Broughton, Southeast Raleigh, and Cardinal Gibbons.  Although the marks are not out of this world, the high jump should be very competitive.  Caleb Conwell (Wakefield) comes in with the top seed, but ths past week was the first time he had equaled his 6' 5" set back in December.  Justin Morris (Southeast Raleigh) has cleared 6' 3", and there is a veritable host of 6' 2" jumpers in the event.  In the 200, Kimani Hoffman (Knighdale) deservedly has the top seed, but there are a few sleepers lurking further down the list that can make the race very interesting.  Jalen Buxton (Wakefield), who ran 22.90 indoors, just posted a hand-timed 21.5 this week.  Caleb Gabriel (Broughton) had an impressive winter but hasn't done much yet this spring; this could be the breakout race.  Jamal Frazier (Enloe) also has a big hand time to try to justify, and Jamaree Murray (Southeast Raleigh) has immense talent but hasn't hit his stride yet.

Other Stuff to Watch

Bryce Love (Wake Forest-Rolesvill) was one of the brightest rising stars in the sprints in our state after a magnificent series of performances through his seventh- and eighth-grade years.  He only ran a few races during his freshman season, and now the only place where his name appears in the meet program is on the 4x100.  While that is a terrible shame, if Love is healthy he could theoretically put WFR in range of Knightdale in that race.  Hoffman and Sandy Chapman (Southeast Raleigh) will get to battle in both the long and the triple, and it should be fun to watch in both.  Expect Hoffman to have the advantage in the triple, but the two are very evenly matched in the long jump.  Boys shot put and discus are wide open, with at least four potential winners in each event.  Bakri Abushouk (Cary) returns to high school competition after putting up a US-leading 5000 time; he is slated to run the 1600 and 3200, but it isn't clear if he will be all-out or just running to win.  The Knightdale boys have yet to put up a real burner of a time in the 4x200, but it looks like they are set up for it here.