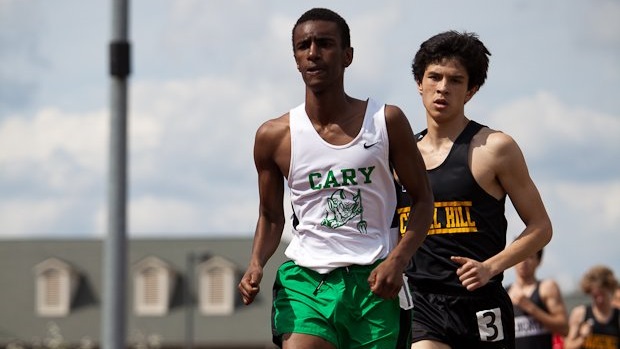 Unusual events make this meet unique, and a high level of talent (especially in the distances) makes it important.

The Ravenscroft Early Bird Classic is a really interesting meet, for two reasons: first, the unusual combination of events that it provides, and second, the level of talent that it has attracted.  Last year the meet drew well-deserved attention for some strong performances, and this year there are even more top-flight athletes attending.  With the 3000, the 400 Hurdles, the 800 Sprint Medley, and a variant of the Distance Medley (400-800-800-1200 instead of 1200-400-800-1600), the meet offers some seldom-raced events at a time in the season when they don't take away from qualifying for regionals.  Although it is the distance races that stand out, there is talent across the sprints and the field events, and the meet should be very entertaining.  NCRunners will be on-site for photos, so check back later in the weekend for our recap.  And, as always, follow NCRunners on twitter for live updates on the biggest performances!

This meet contains some tremendous distance talent, especially on the girls' side.  In the 3000, Ryen Frazier (Ravenscroft) is the top seed in a fast section that also includes Tristin Van Ord (Chapel Hill), Sophie Ebihara (Cardinal Gibbons), Jennifer Stephenson (Village Christian), Helen Morken (Carrboro), and Becky Meshaw (West Johntson).  Frazier will take on a murderer's row of top talent in the 1600: teammates Megan Sullivan and Mattie Blue (Broughton), Maura McDonnell (Green Hope), Rebekah Greengrass (Panther Creek), Pegah Kamrani (East Chapel Hill), and Grace Morken (Carrboro), among others.  Some of the teams in the distance medley are not running their best talent, but it looks like Cary, Green Hope, and Broughton are loaded up for a good race.

In the 100 Dash you have three runners with great short sprint experience in Shakinah Brooks (Southeast Raleigh), Jasmine Dawson, and Sydnei Murphy (Apex).  They will be going up against two long sprinters that are stepping down for this race: Layla White (Cary) and Atlanta Woodall (Riverside).  That same crew, minus Brooks, will also race in the 200, and you would think White would have the advantage there.  In the 400 hurdles, Southeast Raleigh's Tametris Morrison is the clear favorite, as this race is her best.  Teammate Jacklyn Howell (Southeast Raleigh) is also accomplished at this distance, as is Aminah Ghaffar (Fayetteville Academy).  The 800 Medley (100-100-200-400) often comes down to the anchor leg, and that means Cary, Fike, and West Johnston are all candidates to win.

Margaret Edwards (Ravenscroft) is one of the best high jumpers in the state, while Jordyn Brown (Jordan) is repidly proving that she might belong in that conversation.  Anna Eaton (Apex), Zoe Early (Green Hope), and Megan Comstock (Cardinal Gibbons) are very evenly-matched in the pole vault, where the llikely windy conditions could have an effect on performances.  K'Lynn Beal (Broughton) has the best PR in the group of long jumpers, although Kelsey Perry (Jordan) and Aminah Ghaffar (Fayetteville Academy) are not far behind.  Perry is the odds-on favorite in the triple jump, where she has gone over 37 feet; the next best jumper is in the 34-foot range.  Brianna Heilsnis (Apex) threw a PR last weekend in the discus, creeping closer to the 130-foot mark that is her goal; she would also like to resume her pursuit of 40 feet in the shot put.  Sharmani Hall (Southeast Raleigh) and Jaszmine Bowman (Sanderson) should provide some good competition in the shot.

Broughton and Chapel Hill square off in the 3000, with Chris Reeder and Tima Karginov representing the Tigers against Asher Smith-Rose and Allen Lawrence for the Caps.  Throw in East Chapel Hill's Sam Miner and Ryan Brady, and you get a very nice lead pack.  Cary's distance medley team has a distinct advantage over the rest of the field: they have Bakri Abushouk on the anchor leg.  Nonetheless, Broughton and East Chapel Hill also have lots of talent, and that should make for a good race.  Abushouk is, of course, the top seed in the 1600, where the interesting race is between Abel Tecle (Cary), Nik Kreiling (Jordan), Nick Tyrey (Cardinal Gibbons), and John Dalton Rohr (Broughton).

Kofie Yeboah (Ravenscroft) draws the top seed for the fast section, but this will not be a walkover.  William Buckley (East Chapel Hill) had a strong winter, and Khairee Lewis (Sanderson) can really run, too.  Lewis and Buckley both ran low-22 in the 200 last year, and so did Jamaree Murray (Southeast Raleigh), so that should also be a good race.  Xavier Carter (West Johnston) had a breakthrough in the 55 Hurdles during the indoor season, but the 400 Hurdles is another animal altogether, and it will be interesting to see how it goes.  Paul Taylor (Cary) broke 60 in that race last year, and should provide good competition.  The 800 Sprint Medley looks like it is anyone's race to win.

Donovan Gilmore (Wesleyan Christian, formerly Northeast Guilford) is a 6' 4" high jumper, and that could be enough to take the win on Saturday.  The vault will pit Phillip Thomas (Cary) against Ian West (Fike) and Jose San Miguel (Cardinal Gibbons), plus the newest member of the 14-foot club, Michael Utecht (Apex).  Maleake Goldston (Riverside) should dominate in the long jump as the only 23-footer in the field, unless he is jumping into a stiff wind.  The triple jump appears to be wide-open, with Jaquell Taylor (Southeast Raleigh) having the slight edge among a group of 41-43 foot guys.  After a stellar indoor season, Jon Beyle (Chapel Hill) looks to continue his success in the shot put while adding high goals in the discus, as well.