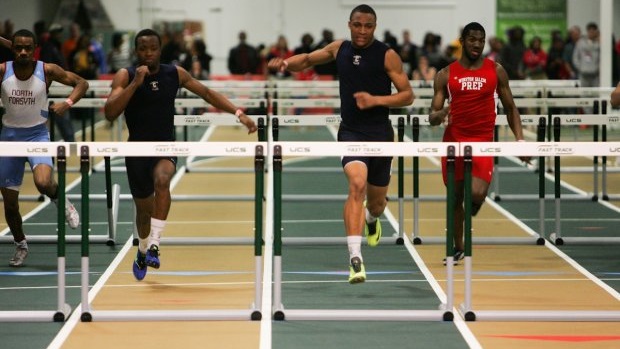 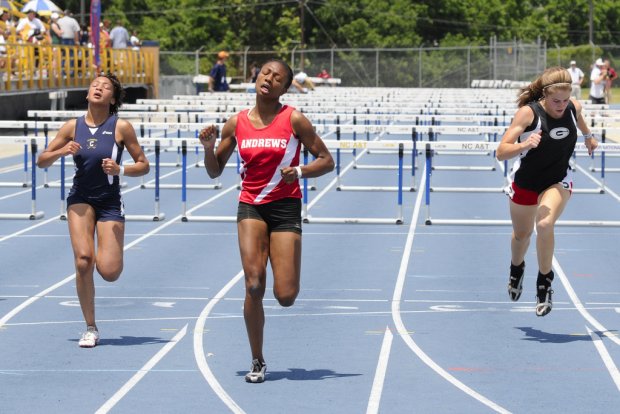 Paisley Simmons (T.W. Andrews) had a very good indoor season, running 7.17 in the 55 dash, and she is the top returner in both the 100 and 200.  Her teammate, Nora McKiver, led all 2A runners in the 300 as well as her signature event, the hurdles (she ranked first in both hurdle races last spring, too).  Both of these High Point girls won two individual state titles last spring.  The good news for their opponents?  This is the last year they can team up to terrorize this classification, as they are both seniors.  Nikolete Hurrinus (Cuthbertson) impressed during the winter with a 1:17.25 in the 500; that could be a harbinger of a sub-25 200 and maybe even a move toward the 56 range in the 400.  That last event is pretty loaded with talent, as Jaleesa Smoot (Salisbury), Alexis Robinson (Greene Central), and Brittany Moss (Bandys) all ran under 58 last spring.  Don't forget about Ro'Daijah Faucette, either; the versatile Cummings senior runs well in the 100 Hurdles, 200, and 400, and I suspect she could be a contender in the 300 Hurdles if she gave them a try.

Even though her team doesn't compete during the winter, never forget about Grace Morken (Carrboro), who has won the 800 and 1600 the last two years at the 2A state meet.  Jessica Wallace (First 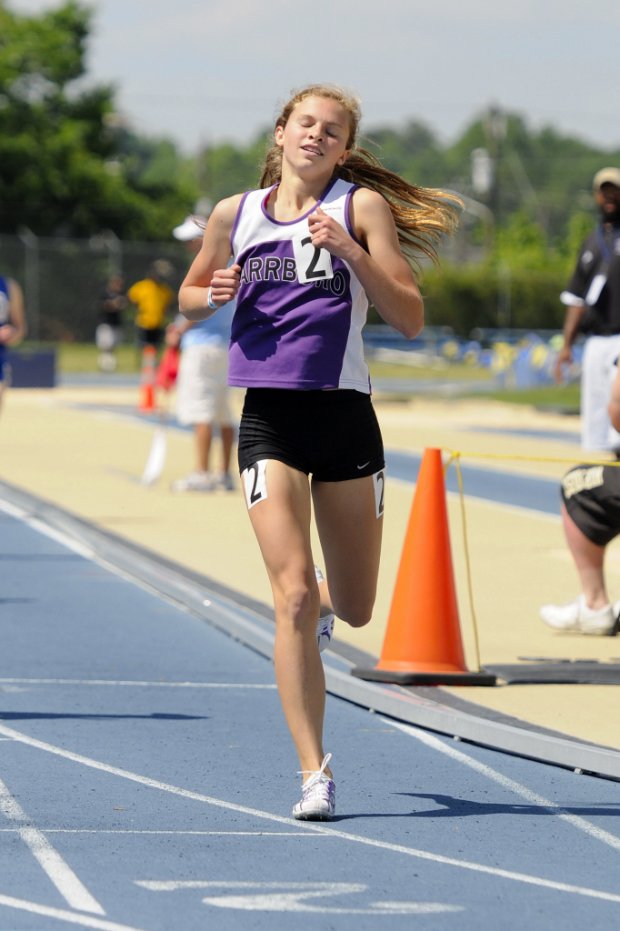 Flight) pushed Morken to the wire in both races last year, and would like nothing better than to steal one of those titles away this spring instead of waiting for her turn next year.  Laney Browder (Wilkes Central) has normally been known for the longer-distance races, but she ran 3:06.25 for the 1000 this winter to lead the 2A rankings in that event.  Hana Ratcliffe (Durham School of the Arts) and Caitlin Potter (North Lincoln) also broke 3:10.  Madison Simmons (Cuthbertson) posted the fastest 1600 time in the classification this winter with her 5:22.43.  Callie Wynn (West Davidson) ran 11:15.77 for 3200 during indoor season, while Arden Vessie (Corinth Holders) was close behind at 11:22.92.  Allie Castro (North Lincoln) fits right in the middle of those two with her returning time of 11:18.09, and she is a strong miler as well.  Morken's Carrboro teammates Maysa Araba, Alexa Phillips, and Helen Morken are also contenders in the distance races (and their 4x800 should be incredible if they put them all together).

Libby Florence (Cedar Ridge) has been jumping 5' 4" consistently all winter, and seems poised to break through with a PR jump during the outdoor season.  She will need it to compete with Hunter Welborn (Starmount) and Ashley Parker (Draughn), who have both cleared 5' 6" in past seasons.  Nikolete Hurrinus (Cuthbertson) was the only 2A long jumper to break the 17-foot barrier indoors, a feat that Miracle Campbell (South Iredell) accolmplished last spring.  Teshlyn Smith comes out of the winter season with a commanding lead in the triple jump, as her 37' 6" mark is almost two feet farther than any other girl in this classification.  Smith is also a 17-foot long jumper, and could be a contender for a double championship.  Lindsay Bren (Swansboro) is the top returner in the pole vault from last spring.  Mookie Chavis (Bunn) stole the spotlight in the shot put during her freshman season; she is the top returner with a mark of 39' 10" (and word has it she threw 42 in a dual meet).  The discus is pretty wide open, with top returner Samantha Layko (Croatan) holding only a 4-foot lead over Cheyenne Gloster (Salisbury), with six more girls beyond 100 feet last spring.

When healthy, James Drummond (Lexington) is one of the best sprinters in any classification; he led all 2A athletes in both the 55 and the 300, although a mild injury prevented him from gaining the state title in the short race.  Maurice Eaddy 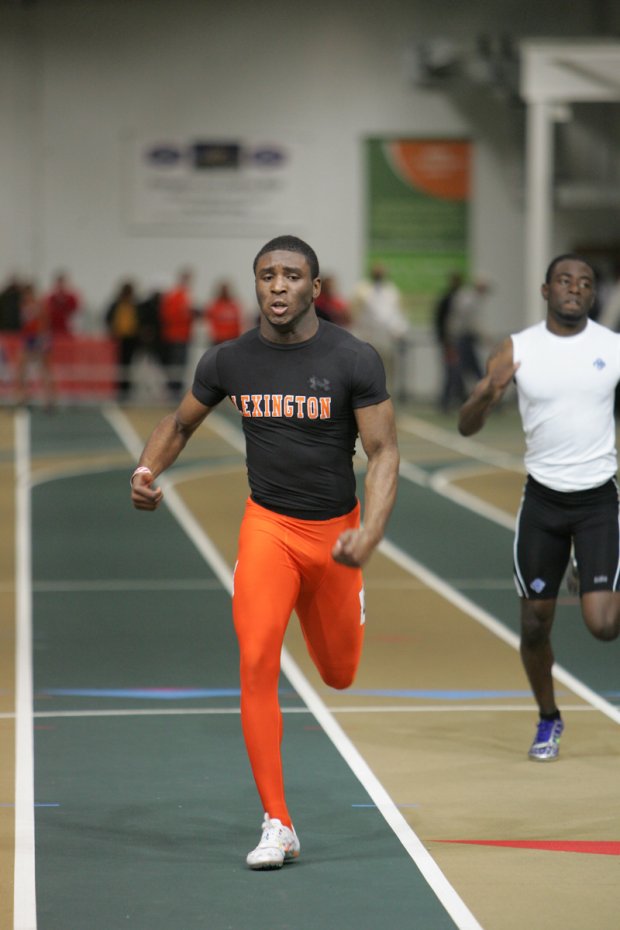 (Jordan-Matthews) ran a blistering 10.60 at his conference meet last spring, but then was not able to duplicate the performance in the postseason (could have been windy, or perhaps minor injuries hampered him).  Cameron Cooper (Cedar Ridge) was the surprise winner in the 200 during outdoor season, and also the runner-up in the 100.  DeAndre Thompkins (Swansboro) is the only other returner with a sub-22 time in the 200, and he also broke 50 in the 400.  Amari Devaughn (T.W. Andrews) ran 1:07 for the 500 this past winter.  Teammates Isaiah Moore and Thomas Jones II (Cummings, top) are the top two hurdlers in the 2A ranks; in the spring, Moore won the 110's last spring, while Jones took the 300's.  Dante Dorsey (Shelby) provides close competition in the 300 Hurdles, and Moore can run it pretty well, too.

Mick Stanovsek (First Flight) emerged during the winter season as a legitimate contender; he led all 2A runners in the 1000 with a time of 2:38.95.  It would be a good year for him to step up and try to take the 800 title, as there are no sub-2 minute returners in this classification.  Walter Bugler (Northside) has the top time from last spring with his 2:00.86.  Andrew Fea (North Lincoln) finished indoor track as the top 2A 1600 runner, and teammate Joshua Mosteller was second.  However, A.J. Tucker (Cedar Ridge) won that race last spring, and he ran 9:30.70 for 3200 to complete a strong winter season.  Tucker, the 2A cross country champ, will be very hard to beat at either distance in the spring.  Corbin Boyles (Maiden) is the defending 3200 champ, having run 9:45.18 last spring; Ryan Shannon (North Lincoln) posted a 9:45.98 in the same event this winter.  Keep an eye out for Derek Chavis (Central Davidson) and Dominic Collichio (Carrboro), both of whom had solid cross country seasons but did not compete in the winter. 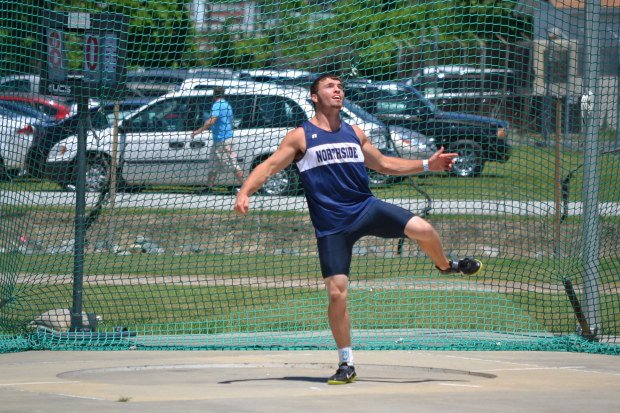 Isaiah Moore (Cummings) continued to dominate the long jump this winter, posting a best mark of 23' 10".  Tevin Bates (Greene Central) nearly broke through the 23-foot barrier lasst spring, and Jayvonne O'Neal (Beddingfield) and Jesse Earnhardt (East Lincoln) both jumped over 22 feet during indoor season.  Moore is also a 6' 6" high jumper, which puts him on even footing with Brock Reynolds (West Stokes), although both struggled at the 2A state meet last year.  Not content there, Moore spoke about possibly adding the triple jump as well, and you can bet he will be a contender in that event if he so chooses.  Speaking of the triple, Kyheem Cheetham (North Brunswick) jumped 44' 6.75" during indoor season, while Rasean Bledsoe (Salisbury) and Quadtavious Lawrence (Bunker Hill) both return with marks over 44 feet from last spring.  James Rowland (Northside) threw 53' 6" in January, and he also leads the list of 2A returners in the discus with his 157' 2" throw.  Scott Peretin (Carrboro) is the only other returner with a 50-foot throw on his resume, and he also tossed the discus over 145'.  Ethan Smith (Cedar Ridge), the defending 2A outdoor champ in the pole vault, had the top mark in the state for any classification this winter.  Casey Simmons (Randleman) will try to get over 15 feet this spring, which would make things very interesting at the state meet.

NCHSAA 2A Boys Returning from 2012 Rankings