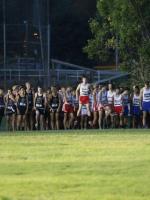 Boys Class of 2018 Rankings...
Haywood Ferguson was the 5th-fastest freshman in the state during cross country, but right now he tops the 800 and 1600 lists....

Frazier Removes All Doubt, Mansure Completes Stunning Year
Was she the best in the South?  Is she the best ever from NC?  Is she a legitimate contender for the national title?  Yes, yes, and yes....

North Carolina's Future Stars of XC Boys Team...
Sometimes consistent improvement doesn&#39;t get the headlines, but it DOES lead to future success!...