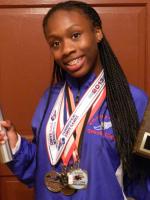 NC at VT: Virginia Tech Invite Preview...
There may not be much room to sit, or even stand, but that track in Blacksburg runs fast!...

VA Tech Invitational Accepted Athletes List Released!!!
With under two weeks until the 2015 Virginia Tech Invitational, MileStat is excited to release a preliminary performance list which includes all the accepted athletes....

AAU Club Nationals: Day 8 Girls Summary (Final Day)...
Well everyone, I’m back with the last AAU Club Championship recap. This whole entire week has been so hectic, with all the athletes that were running and the rain delays, but it’s all over now....