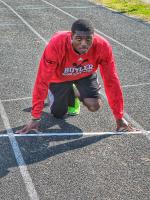 Invitational Events Take David Oliver Classic to the Ne...
Marcus Krah (Hillside) almost stole the show in the hurdles prelims, but a pair of US #1's in the dash finals brought a spectacular close to a big afternoon....

A VERY Early Look At 2015: Returning Boys Outdoor Rankings
Will Ty Jaye Robbins become the next NC sprint star, or will it be Nyheim Hines?  Having both back in 2015 makes things more interesting....

Summer Track Rankings: 17-18 Boys...
Quashawn Cunningham has extended his strong spring into the summer months, and might be angling for a trip to Houston....