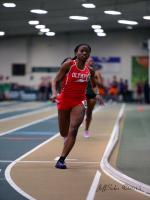 All-Classes Outdoor Top 50: Girls Field Events...
Surprise! Sydnei Murphy (Apex) leads the state in the long jump and ranks in the top 10 in the country. (Wait, that's the exact opposite of a surprise, isn't it? Never mind.)...

All-Classes Outdoor Top 50: Girls Sprints & Hurdles...
It was a Mustang kind of day at Marvin Ridge on Saturday, with McKinley McNeill and her teammates setting 6 NC #1 marks....

Snow Day Bonus: Girls Combined NCHSAA State Meet Result...
The top 15 performances in every event, from all 3 classifications put together, including Khayla Dawson's new PR in the shot put....

4A Girls Returning Indoor Track Rankings...
Alycia Springs (Mallard Creek) is the top returning thrower in the state, and one of the best in the nation as well....

All-Classes Returning Indoor Track Rankings: Girls Fiel...
The 2014 Indoor season was when Sydnei Murphy broke through on the national stage in the long jump....

Summer Track Rankings: 17-18 Girls...
Mookie Chavis has shown that she is not just a shot putter, as she tops the state rankings in the javelin....