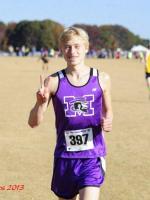 North Carolina Athletes at New Balance Nationals Indoor
Ryen Frazier now ventures to the scene of one key aspect of her older sister's legendary senior year, as the younger sister continues to add to her own legacy....

Senior Spotlight: Zach Boone...
The Mitchell senior has had a distinguished career, but the most impressive things about him are things you can&#39;t see from watching him race....

Combined Results: NCRunners Elite Invitational...
Ryen Frazier shattered the course record with a 17:18.13, but who had the best combined team performance of the day?...

Top 50 NCHSAA 1A Runners...
To nobody&#39;s surprise, Zach Boone is on top of the boys rankings again this year - will anyone be able to challenge him?...

Week 3 in Review...
In all the excitement over the Jungle Run, don&#39;t miss the other great performances - like Zach Boone&#39;s run on a difficult Black Mountain course....