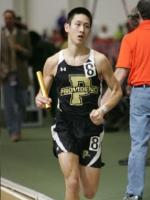 4A Returning Team Rankings: Early 2015 Predictions...
Did we mention that Parkland&#39;s girls had only one scoring senior on the team for their 2014 championship?...

Boys Returning Indoor Rankings: All-Classes Top 10 for ...
It&#39;s never too early to look for next year&#39;s indoor stars, like Hillside&#39;s Marcus Krah.  Who are the other top returners?...

Week 6 in Review...
Even though the weather was cold, there were teams that competed over the last two Saturdays....

State Qualifiers To Date: 4A Boys...
Knightdale and Southeast Raleigh currently rank second and third, respectively, in the nation in the 4x400....

State Qualifiers To Date: 4A Boys...
Jamaree Murray (Southeast Raleigh) has a big lead in the 300 rankings, and he&#39;ll get to run the 400 against Elite competition Saturday....

Winter Weeks 1 & 2 In Review (Polar Bear Results)...
The reward for all the effort you put in, running in the dark and in chilly weather? You get your time listed on MileSplit!...