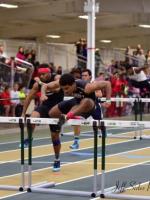 Hawk Invitational Shines in First Year...
Seven new state leaders, including freshman Kyna Robinson (SE Raleigh), were crowned during a meet that was highly competitive despite both the holiday weekend and the cool, rainy weather....

Border Clash, Part 1: NC Out to Dominate Taco Bell Classic
Alycia Springs and Khayla Dawson hold the top two seeds in both of the girls throws, just two of a host of NC athletes seeded well in the meet....

Very Early Class of 2016 Outdoor Rankings: Boys Edition
It seems like Brent Carroll has been around forever, thanks to his early success in club track, but he's just a junior - and he's also the first guy under 40 in the 300 Hurdles this season....

Boys 4A Indoor Rankings...
When Kimani Hoffman and his Knightdale teammates all get on the track at the same time, it will be a sight to behold....

NCHSAA 3A Rankings...
Check out the expression on Blake Dodge&#39;s face: that&#39;s the realization that she hasn&#39;t come close to full potential yet....

Entries Are Open for Champions Tune Up...
Last year, the 800 under the lights produced incredible results by Craig Engels and Nate Gordon....