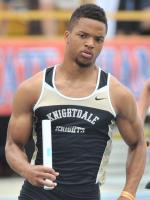 Week 5 In Review...
Knightdale&#39;s boys, in three different uniforms, began their drive toward the outdoor state meet by displaying their 400-meter depth....

4A State Meet Preview...
With a fourth consecutive team title on the line, Marquavious Johnson and his Knightdale teammates will have to bring their best....

State Meet Coverage Central...
Nearly all of the state&#39;s best will be on display in Winston-Salem this weekend, starting Friday night....

4A Boys Team Power Ratings...
Just in time for the state meet, power ratings are back!...

Durham Striders Invitational Recap...
Charminique Hackney (Cary) continues her meteoric rise, reaching all the way to the national lead in the 55 Dash....

Durham Striders Invitational Preview...
Some of NC&#39;s top distance runners, including William Roberson and Patrick Sheehan, will kick off their indoor season at UNC....