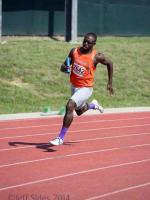 Watkins Throws Big (Again): Alumni Report 3/21...
T.C. Roberson grad Sequoia Watkins made the NCAA Championship last spring in the discus throw, and she is off to a strong start this spring with a Top-25 mark....

Spring Weather Brings Rotating Minors: Alumni Report 3/...
The older Minor brother, Ryan, is at Coastal Carolina and still throwing the hammer well. No word on whether he still has the mullet....

MEAC and CIAA Take Center Stage: Alumni Report 2/14...
Qizeah Jackson (Westover/North Carolina A&T) was one of many former NC prep athletes competing in the two conference championships this past weekend....

Summer Track Rankings: 17-18 Boys...
Quashawn Cunningham has extended his strong spring into the summer months, and might be angling for a trip to Houston....

Champions Tune-Up Performance List...
The competition was so good, even Trent Friday had no choice but to sign up for what is shaping up to be the best Tune-Up yet....