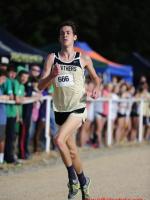 Boys XC Preseason Rankings: #17...
Deju vu in more ways than one - with teams ranked so close together, the 4A West is shaping up to be wild this year....

Foot Locker South Boys Preview...
After last year’s scintillating record run of 14:28 by Sean McGorty(Chantilly, Fairfax, VA), it would seem there would be lull before someone could challenge the record again. But, in recent years t...

Great Outdoor Provision Co. Weekend 12 Preview...
The first gun fires at 10:00 Saturday, starting off a day filled with some of the most exciting battles in recent memory....

Wendy's Invitational Preview...
Deja vu?  These two friends already had one epic finish at McAlpine this season, and this weekend could produce another....

North Carolina Moves Up in National Rankings...
Wyatt Maxey and Ian Milder are getting some recognition nationally, along with a few other North Carolina runners....