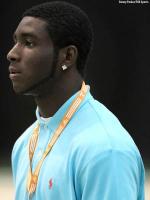 Ranking the Class of 2013...
Wesley Frazier really has nothing left to prove at the end of a stellar career...but you get the sense she might still prove something....

Champions Tune-Up Preview...
Last year, Megan Sullivan posted one of the best 800 times in state history; this year, she&#39;s in a loaded 1600 run under the lights....

NCHSAA 2A Rankings...
Think the Carrboro domination is over now that Grace Morken is graduating?  Obviously you don&#39;t know the girl on her right....

NCHSAA 2A State Meet Recap...
It was repeats all around, as Carrboro&#39;s girls won their 3rd straight championship and the Cedar Ridge boys got title #2....

Senior Spotlight: James Drummond...
The Lexington senior has a plan for his future that is quite ambitious, but he has a really good reason for that....

NCHSAA 2A Regional Previews...
Can a school win a regional team title if they only score in 5 events?  We&#39;re about to find out this weekend....