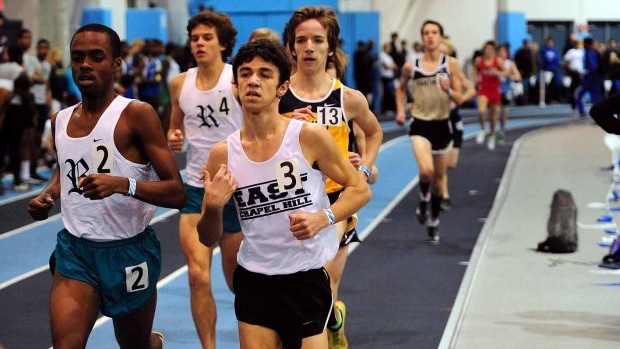 Indoor track can bring many things for a distance runner, from a breakout season to redemption after frustration.

This preview is based on returning times from last winter & spring, as well as improvements made during the fall cross country season.  Only indoor times are included in the returning rankings below (no polar bear marks).

Of course, you can't think about girls' distance running in this state without focusing on Wesley Frazier (Ravenscroft).  Although the NCISAA does not fully sanction an indoor season, she has always competed in a few national-caliber meets during the winter, and she has done well.  Known for her long-distance prowess early in her career, she showed over the last two years that she is a force in the mile; wouldn't it be interesting to see a 1000 or 800 from her this winter?  Last year, Frazier won the Brooks PR two-mile, and then finished fifth at the New Balance Indoor Nationals, and she ranks 2nd in the country among returning runners (10th in the 1600).  The last time I spoke to Darby Middlebrook (Watauga), she was coming off a serious injury at the 4A West Regional and told me that she would be taking the winter season off from competitive running.  That means the top public-school returner in the 1600 and 3200 won't be in the field for the indoor state meet.  Nonetheless, the 4A classification is loaded with talent in the girls' distance races.  Megan Sullivan (Broughton) earned the 4A state championship this fall, and that improvement makes her a prime candidate for sub-3 and sub-5 races this winter, even in the midst of basketball season (and don't forget, she ran 10:46 for 3200 in the spring).  Jennie Cunningham (Pinecrest) finally broke through the 3-minute barrier last winter, and though she had a rough summer and early fall she is well on track to recover her place atop the 1000 rankings; she ranks 16th in the country among returning runners in that event.  The interesting thing regarding Jennie will be seeing if her development in the 1600 was set back by her training disruptions.  Maura McDonnell (Green Hope) is always a contender in the 1000, and she could make the step to the 1600 this winter as a prelude to her college running career.  Mattie Blue, teammate to Sullivan, is another top contender in the 1000 and 1600, and here's hoping that she is fully healthy after a difficult cross country season.  Anna McBride (Davie) is a likely candidate to bring home the 4A 3200 title if she goes all-in this winter, but wouldn't it be ironic if the Watauga girl that wins the two-mile turns out to be Madison Harman?  Expect Blake Dodge (West Carteret) to continue as the top girl in the 1A/2A/3A mid-distance races, although either Carmen Hilliard (South Brunswick) or Katie Cease (West Carteret) could bring home a title.  Allie Castro (North Lincoln) and Mary Grace Doggett (Cardinal Gibbons) enter the season as leading contenders in the 1A/2A/3A 3200.  Which newcomers have the potential to shake things up?  Sophie Ebihara (Cardinal Gibbons) and Anna Vess (AC Reynolds) had the best fall seasons, while Blair Ramsey (Grimsley) ran 5:22 last winter as an 8th-grader.  If you're looking for sleeper candidates that might be a bit off the radar, consider these: Chandler Borton (RJ Reynolds) is the only girl besides Middlebrook to appear on all three returning lists below, and this is the only season where she runs full-time; Kayla Montgomery (Mount Tabor) finished the fall season with a huge PR and could be in line to threaten the 11-minute mark this winter;  and Ryen Frazier is always a bit of a mystery coming out of the fall season, when she doesn't race, but if she has been training hard she could be sub-5 this winter.

Bakri Abushouk (Cary) was the best runner in the state all fall, and he has already run faster for 3200 than anyone did last winter season.  He certainly has the speed to mix it up in the 1000, as well, but could choose to focus his efforts on the 1600.  It will be interesting to see if either Colin Godwin (Cary Academy) or Ben Huffman (Providence Day) decides to compete in any national-caliber indoor meets, as did Thomas Graham last year.  Both of those independent-school athletes earned national attention this fall; Godwin has the stronger track background, but Huffman clocked 9:08 in November, and that had to open the eyes of some meet directors around the state.  Philip Hall (Terry Sanford) continued his progression as a runner with a strong cross country season, and that means he belongs in the top echelon on the track.  Sam Miner (East Chapel Hill) tops the returning 3200 list, but didn't have the fall season I know he had hoped for; will that provide motivation for a big return on the track?  Wyatt Maxey (Providence) had a very good fall season, and that could put him in the driver's seat for the 1000 (although he has the range to be a top-flight mile or two-mile guy, as well), and John Crossley (West Carteret) will certainly be a contender in that event after a strong spring and fall.  Then come the teams with multiple strong runners, Broughton and Mount Tabor.  For the Caps, the trio of William Roberson, Asher Smith-Rose, and Allen Lawrence all ran strong 3200's last winter, while John Dalton Rohr hit 4:22 in the spring.  The Spartans' top returner from 2012 was Andrew Krivsky, but the rise of Ian Milder and Dalton Nickel this fall will create both competition and versatility among the teammates.  Two young men from the Charlotte area bring some mystery to the start of the season: Alec Lane (Marvin Ridge) ran one of the best 1000's in the state last fall but had a tough fall season, while Christian White (Ardrey Kell) transferred to Charlotte Latin, putting his participation this winter in question.  Dark-horse candidates include Bryan Brackney (Watauga) in the 1000, Tanis Baldwin (East Henderson) in the 3200, and two guys whose giant leaps forward this fall could mean equally impressive improvements on the track: Ryan Brady (East Chapel Hill) and Patrick Sheehan (Lake Norman).  Freshmen don't generally make a big impact in boys' track (distance or otherwise), but Broughton's Jeremy Brown ran extremely well on the cross country course, and rumor has it that he comes with a solid track pedigree.