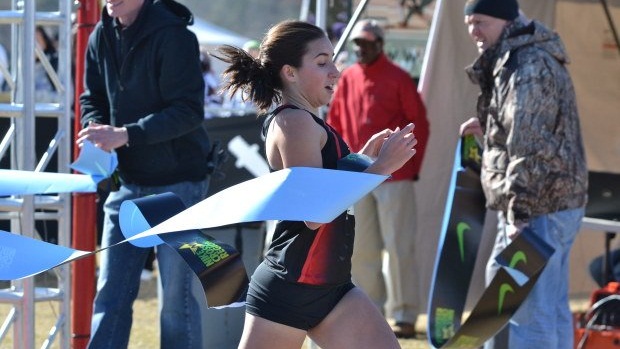 Wesley Frazier's return to the national stage was one of many great performances by NC athletes in postseason regionals.

On Saturday, all eyes in the Southeast were on North Carolina, with both Foot Locker South and Nike Cross Nationals Southeast happening within the borders of the Tar Heel State.  Runners from all over the region came to compete for the small number of qualifying spots to the two national meets (Nike Cross Nationals this coming weekend, and Foot Locker Nationals the following).  Below are the major North Carolina storylines that came out of thoe two intense, national-caliber meets.

After a season of laying low, Wesley Frazier showed that she is in great shape, putting up a winning mark of 17:17 on a day that produced relatively slow times overall at WakeMed.  Frazier pulled away from the rest of the field early (and comfortably), and then she was able to push herself through the middle 3K of the race.  She gets to return to Oregon, where she travelled earlier this fall to compete unattached in a college race, but this time she will compete with some of the best high school runners in the country.  Frazier will be joined by Ben Huffman (Providence Day), who finished fifth in the championship boys' race with a time of 15:22.80.  Huffman, a junior, has had a tremendous finish to his fall season, and when I talked to him after his race Saturday it was evident that he is running with great confidence right now.  He will need that on the muddy hills of Portland Meadows this weekend!  Congratulations to both of these runners for representing North Carolina on the national stage.

Unfortunately, the story for the rest of our state's top runners was one of barely missing the cut, which happened several times between the two regionals.  Alana Hadley, whose goal all season has been to return to San Diego and improve on last year's finish, suffered an achilles tendon injury in the opening sprint from the starting line; despite the pain, she still finished 11th, running 17:39 but missing the coveted top 10 by 7 seconds (it's not clear if she would have been able to race next Saturday anyway, but it was a disappointment for her nonetheless).  Bakri Abushouk (Cary) also finished 11th and missed advancing by one position, in his case a single second being an eternity.  At WakeMed, Pegah Kamrani (East Chapel Hill) was the 6th individual in an event that only advances 5, although she would have had to drop 11 seconds to overtake the final qualifier.  North Carolina's best teams also ended their seasons Saturday, as the Green Hope girls (6th), Cardinal Gibbons girls (7th), and Broughton boys (9th) were unable to get into the top 4 at NXN Southeast to be considered for spots in the national meet.

After a season of battling Cardinal Gibbons, both on the course and in the rankings, the Falcons came out on top in the final race between North Carolina's top two girls' teams.  Green Hope finished with 171 points at NXN Southeast, only 19 points out of third place and decisively ahead of the 216 that Cardinal Gibbons scored.  Both teams fought through injuries to runners in their top 5 all season, and the schools met 5 times over the course of the season; the final record is now 3-2 in favor of Green Hope.  Fans of the sport may recall that Green Hope was ahead early in the season, but Gibbons closed the gap and even took over the top spot in the rankings toward the end of the season.  The two teams were tied for the top spot in the final NCRunners All-Classes Team Rankings, but it seems that we have a #1 team after all.

Great Individual Performances Across the Board

Despite the disappointment that several runners and teams felt on Saturday, with their season ending before they hoped it would, a ton of North Carolina runners had great performances to close out the fall.  Kamrani ran a PR of 17:47 in the windy conditions at WakeMed, and Mary Grace Doggett (Cardinal Gibbons) put in her first sub-18 race with a 17:56.  Ian Milder (Mount Tabor) ran 15:18 at McAlpine, making a case to be the top returning runner in the state with his 17th-place finish.  His teammate, Kayla Montgomery, also had a fantastic race, finishing 15th at McAlpine with a huge PR of 17:55.  Other NC athletes with great races include Trevor Sleight (PR 15:16 for 15th place at FLS), Wyatt Maxey (15:24), Dalton Nickel (PR 15:30), Chris Reeder (PR 15:42), AJ Tucker (PR 15:43), Sydney Foreman (season-best 18:01), Sophie Ebihara (PR 18:06), and Tori Churchill (PR 18:17), plus too many more to list (see below).  Two other performances also deserve note: Alexa King (8th-grader at Marvin Ridge Middle) ran 18:31 at NXN Southeast, while Kerry Leonard (Laney) posted the fastest time ever run in the NXN SE open race, running 19:10.