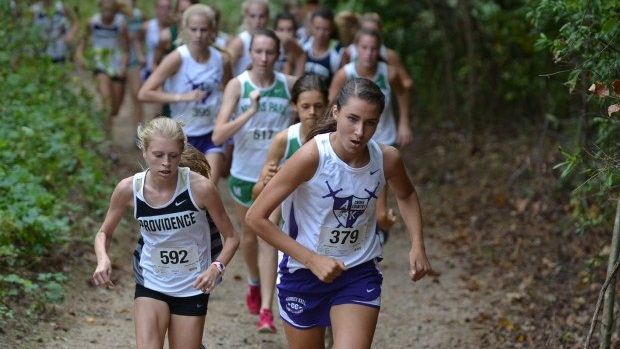 The course at Myers Park takes the runners away from the starting/finishing area immediately, and it is difficult to get out on the course to see them in the middle of the race (especially with heavy equipment).  I did manage to get farther into the woods for my initial photos of the girls' varsity race, and I think that relly helped capture the nature of the course.

Less than 400 meters into the race, Wyatt Maxey (Providence) had already separated from the field as was off in pursuit of the course record.  His Providence teammates were entrenched at the front of the main pack and in great position to contend for the team title. Maxey dominated the race, but fell just short of the course record (blame the long, lonely stretches in the woods, where it is hard to pace yourself).  Fisher Ramsay (East Mecklenburg) placed second, followed by a pair of seniors: Joe Sullivan (Providence) and Ryland Peele (Ardrey Kell).  Dylan Cohen (Providence) rounded out the top 5, setting the tone for a 5-point win by the Panthers over Ardrey Kell. In the early-going, it was Ardrey Kell and Myers Park off to the best starts on a course where passing can be a bit difficult when running in a pack.  Sydney Foreman (Ardrey Kell) and Kayla Glova (Providence) were at the front of the crowd, with several Myers Park and Ardrey Kell runners following close behind. By the time the field returned to the finish area, the runners had spread out enormously.  Foreman (I missed her at the finish) was in complete control of the race, setting a course record of 19:36.6, while Bianca Bishop (Providence) had moved into second place.  Sonia Payerpaj (Myers Park) had held onto third place, with Glova in fourth and Mary Prouty (Myers Park) fifth.  The depth of the Providence squad carried the day, even without one of their top runners, as they won 36-47 over Ardrey Kell.