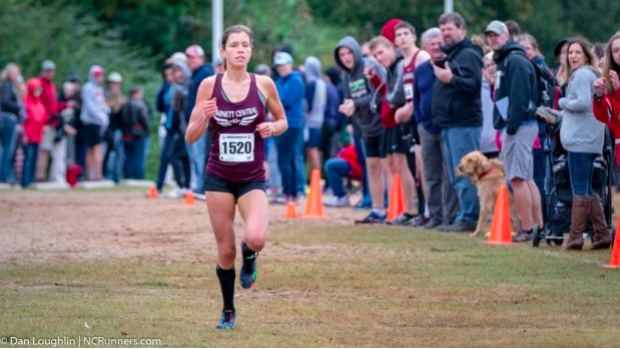 A year ago the 3A girls NCHSAA State Championship battle came down between three teams in Chapel Hill, Cuthbertson and Weddington.  Chapel Hill was able to edge Cuthbertson and Weddington 62-71-74.  This year the story is the same as these three squads look to be the clear favorite over the field.  Individually the top 2 from last year have graduated as the 3A girls field will look to crown a first time individual champ.

Believe it or not, last years 134th place finished Maggie McCormick (Harnett Central) will head into the state meet as this years favorite.  McCormick ran 21:57 at the state meet last year.  Just last weekend she won the 3A Mideast Region in 17:59.  McCormick emerged early on in the season winning the Jungle Run and has continued her success each meet.  It certainly isn't a lock as she'll face off with Madeline Hill (Cuthbertson), Leah Helms (Cuthbertson), Frances Whitworth (Mount Tabor), Jenna Reiter (West Carteret) and Hayley Whoolery (West Johnston).

At the 3A Midwest Regional Frances Whitworth took the pace out hard.  She was caught by the Cuthbertson duo of Hill and Helms who locked up a 1-2 finish.  Whitworth has run 18:22 this season while Hill and Helms are fresh off regional meet PRs of 18:19 and 18:25.  Neither of these three have raced McCormick this season, and it'll be interesting to see who takes the pace out.  Hill placed 3rd last year and Whitworth was 5th.

In the 3A East West Johnston senior Hayley Whoolery took down Jenna Reiter running a PR of 18:25.  Whoolery has been very strong this year winning her last 5 races and will look to carry last weekends momentum in hopes of a top finish this weekend.  Last year she placed 17th in the state championships.  Reiter finished 4th at the state meet last year and placed 3rd as a freshman.  The junior holds a seasons best of 18:27 and will look to rebound off last weeks regional loss to Whoolery.

Out in the West Region Sophia Raspanti (Forestview) and Sophia Ritter (Watauga) took the pace out.  But it was Jonna Strange (North Iredell) who was patient and took over the pace during the last half of the race winning in 18:35.  Ritter and Raspanti would finish under 19 clocking 18:45 and 18:52 respectively.  I'd expect these three girls to contend for a top 10 finish this weekend.

The team battle might be the most exciting of the weekend between the three 3A powerhouses of Cuthbertson, Chapel Hill and Weddington.  Prior to last weekend it had looked like it might be a battle between Weddington and Chapel Hill as Cuthbertson had not beaten their conference rival Weddington throughout the season.  Cuthbertson had arguable the most impressive regional meet out all of North Carolina schools as they finished 1-2 and had 5 girls in front of Weddington's 4th.  This also ranked them ahead of Chapel Hill in Weddington in our season long virtual meet.

Cuthbertson has the best 1-2 in 3A heading into the meet in Hill and Helms.  The two could even replicate their 1-2 finish at the regional level tomorrow.  Their big boost last week was from their 3-4-5.  Gabby Castro, Delaney Patterson and Kaitlyn St. Hilaire had huge days running seasons best of 19:19, 19:25 and 19:28.  The key for Cuthbertson will be their two groups.  They have a big advantage up front, and with a big improvement at 3-5 it makes them tough to beat if they're firing on all cylinders.

Chapel Hill did lose a few girls from last years state championship team, but as always they've rebuilt just as strong as they were.  The Tigers depth through 7 is their strongpoint.  In the virtual meet their top 5 are separated by just 10 places and 37 seconds.  They have depth through 7, and if they have a good day displacing Cuthbertson or Weddington's 5th runner could have a big affect on the team scores.  The Tigers are led by seniors Maggie Springer and Lilly Crook who will hope to lead their team to a team title of their own as their cross country careers wrap up.

Weddington returned their entire top 7 from last year, but injuries have held them back slightly on the year.  They've had big boost from freshman Emma Jones and junior Anna Davis who have been up front for the Warriors most of the year.  They've had a breakthrough from freshman Alyx Beausoleil who emerged in the JV race at Great American and now is a big part of their top 5.  On the season they've averaged 19:07 and like Chapel Hill, they'll need all 7 runners to have a big day as displacing could impact team scores.  Over the last two years when Weddington has beaten Cuthbertson it's typically come down to them having in 7 girls before Cuthbertson's 5th.

Though it'll take big day for Northern Guilford to podium the Knights have had a really impressive year.  They have two All-State caliber runners in Alyssa Hernandez and Emma Fredericks leading them up front.  Hernandez was the 3A 400m Runner-Up last spring and has shown incredible range this season running 18:45 for the 5000m.