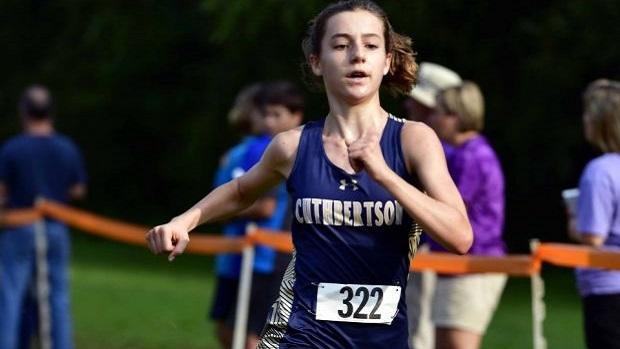 It's the first big weekend of full 5K races, and as always the Western NC Carnival helps kick the season off in style! This meet has been a destination event for its loyal following of teams, providing a challenging course and great atmosphere along with outstanding early-season competition. The WNC Carnival also brings cooler conditions to the table, and that should be doubly true this weekend with a forecast high of only 78 (it is still August, right?).

Since this will be the true season opener for most of the schools participating, we never really know what they're going to bring - some may ask top runners to train through or sit out, while others may load up. The best we can do is try to spot the top teams and athletes using last year's times, and then sit back and enjoy the performances. We always get some surprises this weekend, one of the reasons I love being at one of the Week 1 major meets.

Here's a scary thought: the best team in this meet might also be one of the youngest teams in this meet. Providence Day doesn't have a single senior in their projected top 7, and that group includes three rising sophomores. Despite this unusual youth, the Chargers are ranked 5th among all returning teams in North Carolina. When you consider that many boys make a big step forward between their sophomore and junior years, this team has the potential to be special. Christian Landis clocked 16:07 as a freshman after opening his season with a 17:35 at this very meet, so it will be very interesting to see how close to 16 he runs this weekend.

A.C. Reynolds has one of the shortest drives to this meet, and you can never underestimate the value of sleeping in your own bed (or not getting up before dawn for a long bus ride). The Rockets are talented and deep, coming in at 11th in the NC returning team rankings. That puts them almost dead even with #14 Cardinal Gibbons, and slightly ahead of the next cluster of teams, which includes Durham Academy, Cuthbertson, and Greer (SC). In contrast to Providence Day, A.C. Reynolds is a veteran group with 5 seniors that is looking to make this season count for them. It wouldn't be surprising to see any of these squads finish 2nd in this meet. We will learn a lot about the North Carolina pecking order from the very first race of the day, and it wouldn't be surprising to see any of this group of teams finish as high as second - and the same goes for the possibility of any among the South Carolina trio of T.L. Hanna, J.L. Mann, and Dorman getting into the top 5 with a good race.

Cardinal Gibbons is listed as a heavy favorite by our database, and the Crusaders may actually be better than that prediction (see the individual section below for why). The once-again-defending NC 4A champions (they have won 8 straight titles, first in 3A and then in 4A, and 12 out of 13 when you add in their time in 2A). Gibbons is the #1 returning team in North Carolina and was an NXN finalist last fall, but they will have to work this weekend with NC #4 Cuthbertson also entered. Dorman (the #3 returning team in SC) and J.L. Mann (#8) will lead the South Carolina contingent, both sporting returning squads that can contend in this meet, while Carolina Day (NC #9 returning teams) and Covenant Day (NC #10) are ready to represent NC's independent schools.

Greer's Coen Roberts is the evident favorite, as the junior's 2017 best of 15:36 is 14 seconds better than his closest competitor, Jeb Jones (Science Hill TN). Host school T.C. Roberson is led by Michael Zapherson, another sub-16 returner, and he could find himself in close proximity to cross-town rival Dwayne Lillie of A.C. Reynolds. Hunter White (North Henderson) rounds out the cluster of 15:50's runners, and then there is a gap of about 10 seconds back to the next group. Austin Spencer (T.L. Hanna), Haven Honeycutt (Asheville), Landis, and Neil Mosca (Durham Academy) could also be right in the lead pack. Watch out for Lowell Hensgen (Cardinal Gibbons), who broke out with a 9:29 3200 in the spring, and don't be surprised to see Providence Day's Jason Krell joining teammate Landis up front - they ran 9:36 and 9:37 in the spring.

Although Sloan Walter of Cardinal Gibbons is the top returner in the field and will be a legitimate NC 4A title contender this fall, it will be teammate Madeline Shook that garners most of the attention this meet. The reason is simple: her debut has been almost a full year in the making. Shook finished 9th in the Tennessee AAA state meet as a freshman but then moved to Raleigh and started the 2017 season at Wakefield. She soon switched to Cardinal Gibbons, but because she began the year at another school she was required to sit out the remainder of the 2017-2018 school year. She did get to run at Nike Cross Nationals, since all teams there are technically club squads rather than school-sponsored teams, and she clocked 18:14 while hanging with Walter. Together the two form a very formidable duo up front for the Crusaders, and they will be hard to beat in this race. Madeline Hill (Cuthbertson) could be right there with them, as could Victoria Patterson (Christ Church SC), but those are the only runners with the xc credentials to be considered contenders to win Saturday. If you look at track times, however, you have to add a third Gibbons runner to the mix in Katharine Priu, who broke 11 minutes for the 3200 in the spring.