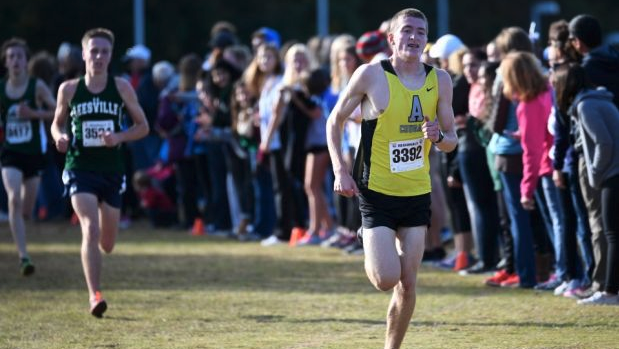 Last fall was an off year for Apex as a typically strong program took 8th in the 4A Mideast Regional mainly due to having some injury within their top 5.  The team was able to take home a 3rd place finish at the NCHSAA 4A Outdoor State Championships in the 4x800 with two sophomores, a junior and a senior.  The team still had 9 boys under 17 minutes last fall and are a program that I believe will have a bounce-back season this fall.

Their top returner will be junior Scott Kennedy who ran 16:23 last fall.  Kennedy ended his sophomore season as the teams #2 guy and placed 25th in the 4A Mideast Regional.  On the track he ran 4:27 for the 1600m and 2:00 for the 800m.  Kennedy emerged onto the varsity squad after a freshman year where he ran 17:42 and ended the team outside of the squads top 7.  I think Kennedy has the potential to be the next star runner we see out of Apex.

Austin Dewey will be the teams #2 returner with a PR of 16:35 as he finished the 2017 season as the teams #2 man.  His fastest two times last fall came at the conference and regional level where he placed 12th and 32nd.  Dewey dropped 9 seconds in the 1600m on the track running 4:41.  The senior will need to step up for the Cougars this fall if they want to return a team to the state meet.

Senior Jacob Vehslage will be another returner from last years top 5 with a PR of 16:36.  Vehslage has been in the teams top 7 the last two seasons and was consistent for the Cougars last fall running in the low 17s before dipping under in his final two races.  He ran 4:40 on the track last fall and 10:23 for the 3200m.  He'll be another senior the team will look to step up this fall.

They'll return two more sub 17 runners from last fall in Simon Griggs and Emmett Lynch.  Griggs will be a senior with a PR of 16:49 as rising junior Lynch ran 16:55 last fall as a sophomore.  Lynch had the better year on the track running 4:44 and Griggs clocked 4:51.  Senior Andrew Edney will return with a 17:04 PR, but finished as the teams #2 man recently at the Baysix Kickoff.  He ran 4:38 indoors as well as 10:01 during the outdoor season for the 3200m.  Senior Andrew Battle is also coming off a track season where he ran 4:45 and could impact the top 5 this fall.

The team brings back a lot of depth as well as a talents senior class that'll be looking to end their final high school cross country season on a high note.  Though we're high on this team for this season things could go well and they could be outside of advancing to states.  They return as the #5 team in their region and some team who is a possible top 10 squad in the entire state could miss out of heading to the state meet this fall.