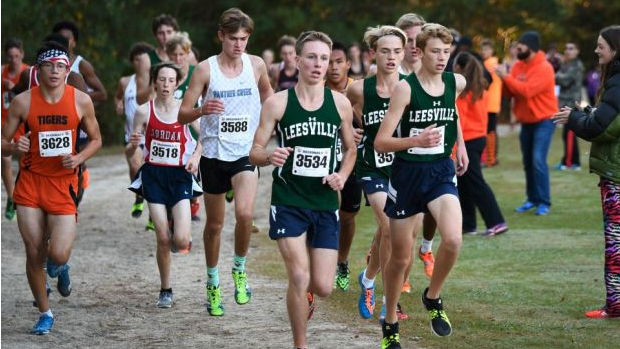 In 2017 Leesville Road peaked perfectly at the NCHSAA 4A Mideast Regional meet to take 5th place and qualify as a team for the State Championships.  Prior to the meet the were not projected to qualify, but six of their top 7 boys set PRs on the day that mattered.  The Pride went on to go from 5th place in the region to 7th overall in 4A and return all but their #2 Ian Hixson and #3 Zach Ohmann.  This fall they'll still be relatively young with a lot of strong sophomores and juniors looking to make up their top 7.

The teams top returner will be rising senior Preston Jones who ran 16:07 last fall and ended the 2017 season as the Prides fastest boy.  Jones had a big season as a junior dropping his PR down from the low 17s to the low 18s.  On the track Jones dropped 10 seconds off his 1600m PR running a 4:29 both indoors and outdoors.  Jones was under 17 minutes in all of his regular season races last fall, and will look to be a sub-16 minute guy during the 2018 campaign as well as a leader of this semi-young squad.

The teams #2 returner will be rising junior Colby Crenshaw who ran 16:29 last fall as a sophomore.  Crenshaw's sophomore year was his first time running XC for Leesville and he was able to end the season as the teams #4 runner.  Crenshaw improved his track PRs last fall running 10:02 for the 3200m and 4:46 for the 1600m.

Andrew Macemore had a big breakout last fall as a sophomore dropping his PR by 91 seconds going from 17:53 down to 16:32 ending as the teams #5 guy.  Macemore returns with similar track PRs as Crenshaw after running 4:47 and 10:15 last spring.  He broke 17 four times as a sophomore and ended the year as the teams #5 and placed 66th at the 4A State Championships.

The team will also return junior Jamal Mohamad and senior Hayden Reed who were in the teams top 7 last fall.  The pair return with PRs of 17:02 and 17:03 from the regional meet a year ago.  Mohamad had a big year on the track running 4:40 for the 1600m.  They'll also return Will Bell who was the teams #8 runner last fall with a 17:13 PR, but was the teams #3 1600m runner on the track with a 4:42 season best as a junior.  Mac Jacobs, Jack Fuhrer, Quinn Conrad and Ethan Ebbighausen will also fight for a spot within the teams top 7 this fall.

I think this team's going to have a tight 1-5 gap this fall as they have no true frontrunner, but a very competitive group of guys.  Last fall when they were at their best they finished with a 17 second 1-5 split at the regional meet, then a 23 second gap a week later at the state championships.  They'll be a team to keep an eye on heading into a highly competitive 4A Mideast Regional where the Pride always seem to be at their best.