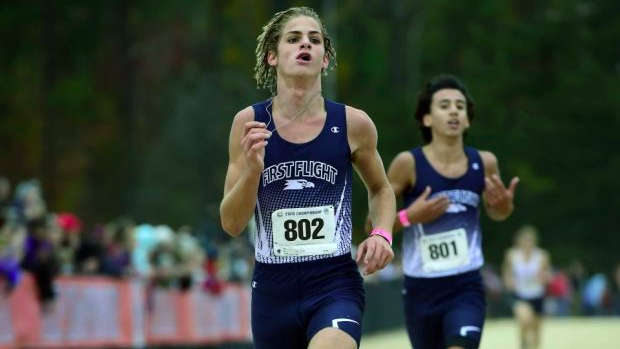 A year ago First Flight was just 11 points shy of being the first 2A boys team from the East Region to win a team title.  They placed 3 boys in the top 10 and will return Zach Hughes, who placed 7th, and Joseph Davidson, who placed 8th.  They graduate their star Skylar Stutlz who was 4th at the state meet last year and won the 1600m at the 2A Outdoor State Championships.  Last year the team was posting fast times without seeing a lot of competition within the state.  But they certainly showed up proving the doubters wrong with an impressive performance at the state meet.

Joseph Davidson was key in First Flight's success last fall.  His first 5 races he didn't break 18 minutes, but ended the season with a PR of 16:24 and ran 16:28 at the state meet.  He continued off that momentum on the track running 4:35 for the 1600m.  A year prior he held a 5:14 1600m PR as a freshman.  As he heads into his junior year he'll have a lot higher expectations heading into the season, as he and Hughes will serve as the teams 1-2 punch.

Tyler Sylvia was very strong for First Flight as a freshman running 16:44 and will be the teams #4 returner.  He did have an off day at the state meet placing 60th, but will return with a lot more experience this fall.  Sylvia only raced twice on the indoor track running a best of 10:39 for the indoor 3200m.  Assuming they have him back healthy he'll be key in helping replace the seniors from last years squad.

The team will struggle a little with their depth this fall graduating three seniors from their top 7.  But they'll return Aidan May and Max Bowlin.  May holds a PR of 16:57 and ran 17:11 last year as a sophomore.  He ran indoor track clocking 10:33 for the 3200m, but missed the outdoor season for First Flight.  Bowlin returns with a PR of 17:28 as a freshman.  On the track, he was sub 5 in the 1600m clocking 4:58.    They'll need these two guys to step up this fall.

This is going to be a young program with no seniors, but it's hard to not to see First Flight back on the podium in a rematch with North Lincoln this fall.