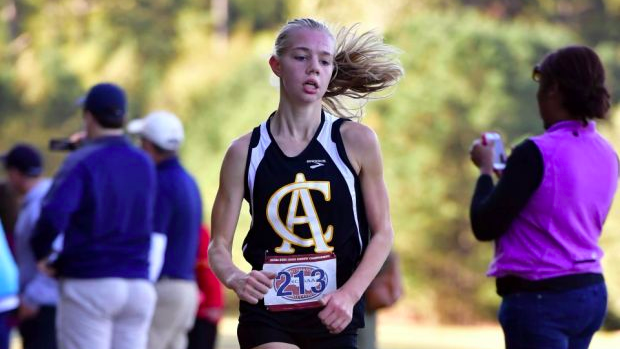 Ava Lathan
Keely Murphy
Thuc Dzu
Suki Bristol
Lia Lathan
Cary Academy came up just short of defending their NCISAA 3A Team Title last year losing to Covenant Day in a tiebreaker.  Luckily they'll return their entire squad other than last years #2 girl Athina Zodl.  They'll be lead by twins Lia Lathan and Ava Lathan as they look to win the first ever NCISAA 4A team title in what should be a four-way battle.
Ava Lathan was their top girl last year as a sophomore running 19:06 as she took 2nd at the NCISAA Championships.  Lathan improved 12 seconds last year, however she missed the 2018 outdoor track season.  If Lathan can remain healthy this fall she'll be the favorite for the 4A Individual title after finishing 9th and 2nd in her first two attempts.
Contrary to sister Ava, Lia Lathan missed the cross country season but made her return on the track.  As a freshman, Lia clocked 19:18 and finished 10th at the NCISAA 3A State Championships.  She returned on the track after some substantial time off to run 5:36 taking 9th at the state meet in the 1600m.  She also ran 11:58 in the 3200m where she took 4th.  Having both Lathan sisters healthy is going to likely make this team finish the year with a much higher ranking than 20th.
Keely Murphy had a stellar sophomore year for the Chargers running 19:55 as she returns as their #2 girl.  Murphy was 12th at the NCISAA 3A State Championships and should contend for a top 10 spot this fall.  On the track Keely ran PRs of 2:36 and 5:39 qualifying for the state meet in both events.  Murphy also clocked 12:04 in the 3200m to place 4th the day prior at the state meet.
Thuc Dzu was a star for Cary Academy her freshman year where she clocked 20:14 for 13th at the state championships.  On the track is where she had a bigger breakthrough running PRs of 2:31, 5:29 and 12:04.  If Dzu can translate her track PRs onto the cross country course than she's got potential to be one of the top girls in this historically strong program.  Rising senior Suki Bristol returns with a PR of 20:26.  She's been consistent time wise her last two XC seasons, but is coming off her strongest year yet on the track where she ran 5:45 for the 1600m as well as 12:17 for the 3200m.  She should certainly be under 20 minutes for Cary Academy this fall.

If things go well for Cary Academy this fall they're capable of being a top 10 team in the state. The one thing they'll lack is depth beyond their top 5 girls.  But if they develop a girl this summer or have some strong freshman join the program all of these worries may not matter.  Can this program sit atop the NCISAA once again this fall?