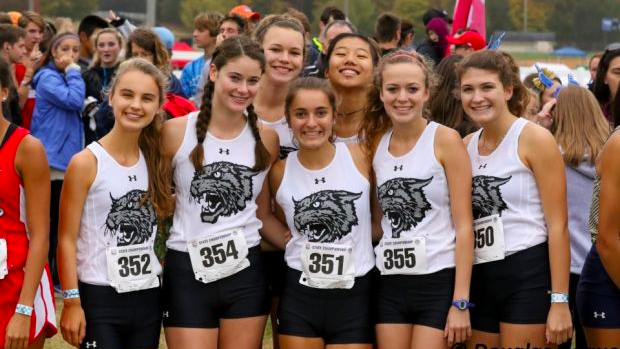 East Chapel Hill returns a small team returning 9 girls from their team of 10 a year ago.  Despite their size, they're going to have a strong team this fall as they return their entire top 5 that placed 13th at the 3A State Meet last fall.  This team should have a tight pack from their top 3 girls this fall with no true frontrunner.

They'll return rising junior Annika Narbut as their top girl as she ran 19:14 her sophomore year and placed 23rd at the 3A State Championships.  On the track, Narbut was ECH's top girl in the 1600m with a seasons best of 5:32 as well as the 3200m where she ran 11:46.  Narbut had a big improvement from her freshman to sophomore year in XC dropping her time from 20:12 down to 19:14.

Senior Jade Strauss will be their #2 returner after a breakout junior year where she ran 19:57.  The key to Strauss this season will be consistency, as her PR was her only race where she broke 21 minutes last season.  On the track, Strauss proved she was ready to make a jump in XC running 5:34 and 12:16.  East Chapel Hill will need her under 20 minutes this season if they're going to have success at the state level.  Her track PR's say she's ready for it.

Another Senior in Connie Mendoza missed a lot of the early stages of the 2017 cross country season, but rejoined the team in top form.  Mendoza clocked a PR of 20:15 also breaking 21 minutes at the state meet.  Just a year prior she held a XC PR of 22:05.  She had her focus on the 800m on the track where she ran a 2:33.6, just off her PR from her sophomore season.

Morgan Ribisl was the teams #4 runner last year, but shows a lot potential to be much more than that this fall.  Ribisl holds a PR from what looks to be 7th grade of 20:09 at the Foot Locker South Regional.  Last year she missed a lot of races before bouncing back for championship season where she ran a season best of 20:50.  On the track Ribsil was strong running 5:33 and 12:26.  If Ribisl can return to full strength this fall she should be able to be one of the teams top girls.

If this team is firing on all cylinders with their top 4 they'll be very solid providing they can improve at their 5th runner.  With no true frontrunner closing their projected 4-5 gap will be crucial this fall.  Sophia Alexander showed on the track that she's ready to make that jump.  She dropped her 1600m time down to 5:45 showing she is in better form than her 21:58 season best from last year.  Alexander only ran three races and didn't look to be in top form throughout the season.  If they can bring her back this team will be capable of having their top five girls under 21 minutes this fall.  They'll also bring back last years #5 girl Maggie Bryan and their #7 from a year ago Amanda Ready.  The duo hold PRs of 21:38 and 21:55 from a year ago.