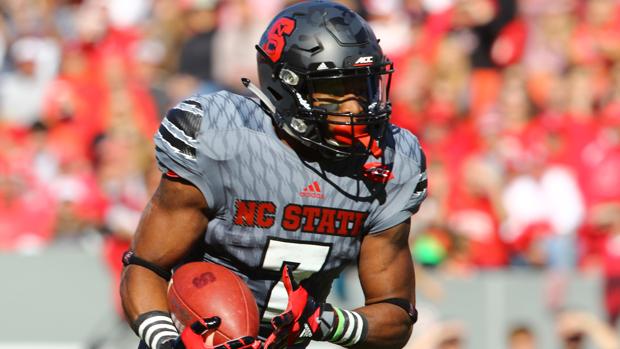 Former North Carolina State and Garner High track and football standout Nyheim Hines was the talk of the NFL Combine today after clocking a blazing 4.38 second 40-yard dash, the fastest among running back prospects.  Hines ran 4.39 on his first attempt prior to clocking 4.38 on his second attempt.

We have a new leader!@PackFootball RB Nyheim Hines records a 4.39u 40-yard dash! #NFLCombine

Hines ran for 1,112 yards and 12 touchdowns last season for nine-win North Carolina State and was a first-team all-Atlantic Coast Conference after averaging 143.7 all-purpose yards per game, leading the ACC and ranking fifth among power-conference players.

Check out his football highlight reel:

Hines was also a Wolfpack track star. He was an ACC champion and all-American running the leadoff leg for the school's 4x100m relay team and was also an all-conference pick in the 100m and 60m.

According to reports, Hines has already met with several teams - the Dallas Cowboys and New England Patriots among them - and should be a relatively early draft pick. His track prowess probably earned him a lot more money after that Draft performance.

For comparison, former Penn State running back Saquon Barkley, widely anticipated to be among the Top 5 picks in April's Draft, clocked in at 4.40 seconds in his 40 at the combine.