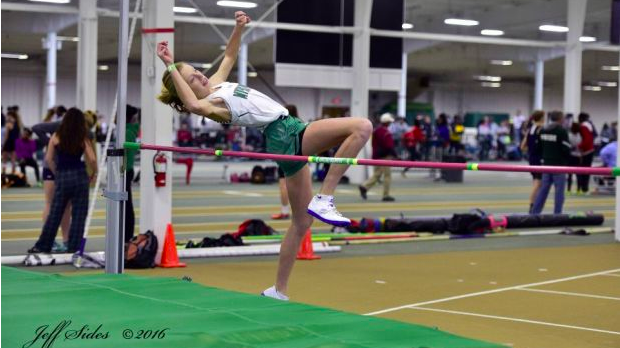 High Jump was certainly going to be North Carolina's toughest event on the girls side heading into the 2017 indoor season.  We had Morgan Smalls (Panther Creek) and Kenya Livingston (Rocky River) both eclipse 5-10 in the 2017 outdoor season, plus a ton of other stars returning, all in the 4A classification.

Addie Renner returned as the NC#4 returner on the outdoor track, though she did jump 5-8 during the indoor season.  Her 5-8 mark was big last year.  It came at the Southwestern 4A Conference Championships where she beat Livingston for the conference crown.  It had seemed prior to that that no one would be close to Livingston heading into the state championships.

Unfortunately, Renner had a minor calf strain leading into the NCHSAA 4A Indoor State Championship and decided not to make things worse and hope to come back strong at New Balance Indoor Nationals.

The junior started off the indoor season strong jumping 5-6 and 5-7 in her first two indoor meets of the year.  But yesterday she had a big breakthrough.

Renner competed at the JDL College New Year Kick-Off where she beat a college field by nearly 8 inches winning the event in a new PR of 5-9.25.  Renner jumped 5-7 at an indoor track last year, the Southwest 4A Conference Championship was held outdoors where she jumped 5-8,  ranking her tied at NC#10 All-Time heading into her Junior year.  Her performance yesterday moved her up to tied for #3 All-Time Indoors!

Renner's mark also is the current NC#1 plus a US#2 performance, only behind reigning New Balance Outdoor Champion Jenna Rogers (NJ)

There will be no harder event at the NCHSAA 4A State Championship than the girls high jump.  With Renner now having thrown the first punch with her 5-9.25, she's setting the bar high for Smalls and Livingston's first real test of the season.  Smalls has jumped 5-6 this indoor season in her debut, and Livingston has jumped 5-4.  I assume both were just busting the rust off getting back into competition after the offseason.

It's going to be fun as three girls can possibly challenge the state record by clearing 6-0!