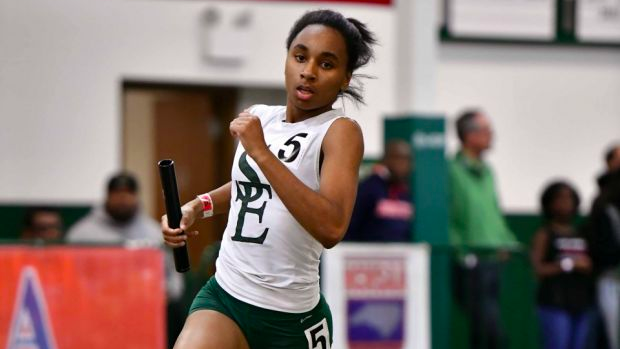 Last Summer we saw 400m runner Kyna Robinson move up in distance and test herself over the 800 meters, where she ran 2:18.97.  Yesterday was her first test in a strong 1000m field and she certainly did not disappoint!  Robinson clocked a 3:07.19, good for a NC#5 mark on the season.  Robinson finished 4 seconds ahead of Bailey Fowler (Green Hope) who took 2nd.  Though this is a very impressive debut, she'll likely still run the 500 at the state meet.  There isn't much time in between events, and it's a nearly impossible double.

Get familiar with this name.  Sophomore Spencer Evans has had a major breakthrough in the Pole Vault this season.  As a freshman he finished this year with a PR of 14-1, but he debuted at 14-6 to kick off this indoor season.  Evans vaulted at two non-high school meets, and posted huge performances of 15-5 and 15-7! His 15-7 stands at NC#8 All-Time Indoors. Yesterday was his first big performance in a Lake Norman uniform coming up just short of his PR jumping 15-6.  Evans currently sits at NC#1 and US#8 this season.  He could be able to challenge Scott Houston's Indoor State Record of 16-10, and become the 6th boy to break 16 feet indoors over the next three years.

Alysia Johnson made her indoor 500 debut yesterday clocking 1:17.22, good for NC#2 US#7.  Johnson's going to have a tough time deciding what event's she'll run at the NCHSAA 3A State Championship.  Johnson excels from 55m-500m, and will also be a key part in Hillside's 4x2 and 4x4.  Johnson continues to prove she's an all around sprint star!

Braxton Ford has been stepping up big time for Parkland this indoor season.  He'd run 1:06.85 on an outdoor track, and proved he was a star yesterday clocking 1:06.85 at Green & Gold.  Ford beat Josh Tiller (Leesville Road) and Jared Dequenne (Davie County) who both ran 1:08.  Ford's mark is good for NC#4 this season.  He'll battle with Khaleb McRae (Southern Durham) for the 3A title this fall.

Barnes continued to roll after winning the 55m Dash and 55m Hurdles Finals yesterday in 7.16 and 8.27 respectively.  Both performances were just off her PRs, but it adds yet another big win over strong fields.  It's hard to see anyone beating Barnes at the 1A/2A level this fall.

Randolph Ross  ties Shane Bechtold (FCDS) at NC#11 All-Time Indoors for the 300m Dash with his win at the Green & Gold Border Clash yesterday.  Ross clocked 34.56, good for a new NC#1, US#9 performance.  Ross has been a major breakout star in North Carolina in the long sprints.  He's going to be a huge factor in Garner chasing the 4A Team Title this fall.  It also helps that he tied Omar McBride's NC#1 High Jump mark at 6-7 yesterday.

The 300m Hurdler has proven her worth on the track without hurdles.  The senior was just off her PR yesterday running 40.94 in the 300m Dash.  The 300 was arguably the deepest field of the meet, and Wright held off Makhia Jarrett (Enloe) who took 2nd in 41.64.  Wright's time is good for NC#4 this indoor season.