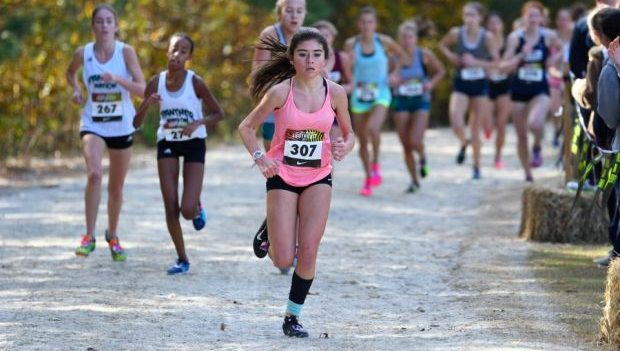 Last year Cardinal Gibbons girls left WakeMed Soccer Park with a third place finish and a 20 point defeat to Blacksburg and Lake Braddock (VA) in hopes of an at-large bid to NXN.  They did not receive an at-large bid.  Luckily they returned all but their #2 Annie Pierce.

Coming into this season the Crusaders were ranked #1 in North Carolina and #14 in the United States in our Flo50 Rankings.  They debuted their top 7 at Friday Night Lights and were projected to win handily.  Gibbons were 4th behind 3 North Carolina teams.  I don't think they planned to go all out, and Sloan Walter DNF'd, but even with her they still wouldn't have won.

Their next test was the Trinity/Valkryie in Kentucky, a meet equivalent to Great American strength wise with teams from the Midwest and Northeast clashing.  Gibbons girls had a much stronger day finishing 5th overall.  Though they were likely contenders to win it, but it was a big step forward from an off debut the week before.

The next big test was at Great American.  A massive meet on their home course, and NXN Southeast course, WakeMed, against a lot of teams getting a NXN Southeast preview.  Things didn't go as planned.  A team expected to have 5 girls under 19:00 only had one girl break 19 that day.  They finished 11th overall.  170 points behind NXN defending champ and current Southeast Regional favorite Blacksburg as well as many other schools in the region.  Gibbons came out of the race as the #5 ranked team in North Carolina in the weekend meet merge.

The team was still running well, but it seemed like they were in state title defense mode and not fielding a strong team than we've seen come up short of NXN in the past.

Gibbons came into form over their conference, regional and state meet winning all three.  They beat Green Hope with a score of 62 to 89 at the NCHSAA 4A State Championship winning their 8th straight team title. And through the meet merge they ranked #1 in the state by 60 points.  Things were on the up for Gibbons.

Things were coming together, but it still wasn't seeming like a team that you'd think would qualify for NXN this season.  But the Crusaders were hopeful.  They had three weeks left of training to go to prove they were the team that had a lot of preseason hype.  They had two seniors in Marissa Bishop and Alina Rovnak that have seen their team come up short.  They had one last shot to make a trip out to Portland with a program and a sport that they've dedicated everything to.

Gibbons was ranked 6th in the Southeast Regional Rankings prior to the meet.  There was a shot, but it seemed like they'd be outclassed by some teams that had beaten them a few times this season.  Saturday their shot at redemption was here.  They were set to take their shot at qualifying after coming up so short last fall.  But it would take a PR day from the majority of their squad.  There was no room for error.

Through 2K the Crusaders (Raleigh Catholic) were out in good position.  Just 21 points out of 1st and 3 points out of 2nd.  Sloan Walter lead the charge in 15th overall, the 10th individual on a team.

Things are still pretty close together through this part of the race, and points can swing very quickly, so Gibbons had some work to do.

Sloan Walter led the girls through the finish line in 16th place finishing as the 11th overall team scorer running 18:10, a season best.  Senior Alina Rovnak and UNC Charlotte commit was their second girl clocking a 14 second PR of 18:38.  This was a big performance by the senior in her first time under 19 at WakeMed.  Rovnak scored 19 team points

The freshman star Caroline Mullahy was not far behind clocking a 14 second PR of 18:46 to finish 33rd! The 23rd team scorer in the field.  Katharine Priu made up a ton of ground from 2K to 5K going from 68th to 44th running her seasons best of 18:54.  This was big.  Priu ran under 20 once in three races this season coming off injury from last year.  Senior Marissa Bishop who has been a big part of this squads team success over the last few years rounded out the top 5 clocking 19:00.

Gibbons didn't have the frontrunner that their competitors had with no one in the top 10.  The did have a 50 second gap from 1-5.  1 minute better than all the schools in the top 4 which was the difference.  They were the first school with 5 girls to finish with their 5th girl well ahead of everyone else's.

The heartbreak from 2016 stuck in the back of their minds for 365 days.  Despite the regular season not going as planned these girls believed.  They became the first North Carolina team ever to win the NXN Southeast Regional.  First ever girls team other than Green Hope (2010, 2014) to advance to NXN.

This is the team we thought we'd see all year from Cardinal Gibbons.  The talent has been there all along, things just had to all come together for them.  Through everything they've been through this season this win defines exactly what this program is.  I can't wait to see what these girls do in Portland next week.