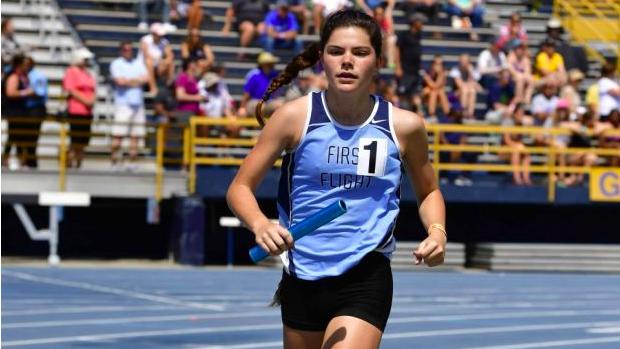 Rodman also plays soccer for First Flight, so we don't see her as ofter during the outdoor track season.  She did come back to lead her team to a NCHSAA 2A 4x800 outdoor team title, and took 2nd in the open 800.  After soccer ended she focused on only track for a few weeks, and immediately ran 2:14.56 at NCRunners Elite then 2:13.31 at New Balance Outdoor Nationals.

Rodman gave us this quote about her commitment, "In the end, I chose Columbia because it was where I felt most wanted and where the coaches were the most supportive. It seemed that they not only cared about my development as an athlete, but more importantly as an individual. Those feelings coupled with the opportunity of an Ivy League education made the choice simple. And New York City is incredible; I can't think of a better place to experience college and spend such an influential four years of my life."

Once Rodman gets to college and is able to focus on running the sky is truly the limit.  Congrats to Alex, and we're looking forward to seeing what she can do this indoor track season!

Rodman by the Numbers