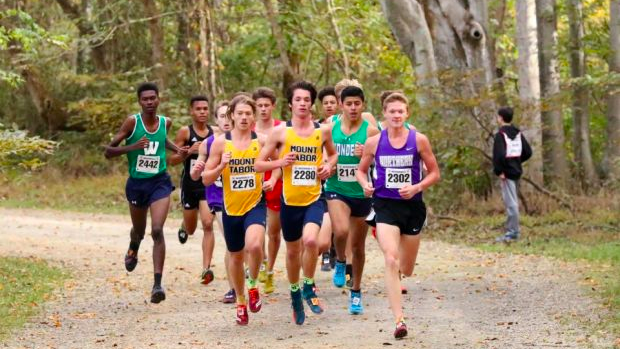 David Melville has won two straight 3A Individual crowns.  He comes into the 3A state championship as the 3A Midwest runner up.  He matched up against him biggest competitor Cameron Ponder (Mount Tabor) who was able to outkick him over the last 600 meters at the regional meet.  Melville has run 15:03 this year while Ponder has run 15:20.  Ponder's individual performances certainly trump his PRs.  He was 2nd at the Manhattan Invitational and won the Wendy's Invitational over 15:00 man John Tatter.  Melville is certainly a star.  He was 3rd at NXN Southeast last fall, 4th at Great American this year, and a absolute stud in muddy, rainy conditions seeming to always exceed expectations when the weather is bad.  It's expected to rain tomorrow.  Two years ago when it rained Melville won 3A in 16:12, while Ponder was 5th in 4A running 16:10.

These guys are different types of runners.  Melville is a guy that's a true cross country runner and better over longer distances.  He's capable of taking it hard from the gun and holding onto a tough pace.  Ponder is a star with a ton of speed.  He's run really well in races where he's able to takeover the pace from 600-800 out and end it with a fast finish.  This should be a legendary battle in North Carolina XC history.

One guy I can't count out is Laderique McNeill (Harnett Central).  McNeill was in a coma last April, now he's eyeing a individual state title.  McNeill has run 15:29 this season and was the 4A Mideast champion over some very talented individuals.  I think McNeill will leave everything out there and battle it out with with Ponder and Melville tomorrow.  He's overcome a lot to get to this point and really has nothing to lose.

Ben Verchick (Union Pines), Ryan Combs (Chapel Hill), Michael Moerk (Mount Tabor), Gavin Mouat (South Iredell) and Brandon Hernandez (A.L. Brown) will all be battling for top 5 finishes tomorrow as well.  Moerk holds the third fastest PR in the field of 15:29, but was beaten by Hernandez at the regional meet.  If Moerk has an on day he could roll with Ponder and Melville up front.  Combs had an off day at the regional meet, taking 5th in the Mideast, but I think he will rise to the occasion tomorrow to lead his team to a repeat team title.  Verchick was 2nd in the Mideast and has run 15:40 this year.  He's had back to back battles where he's been beaten by McNeill, but that should prep him for a fast race this weekend.  Hernandez showed no fear last weekend facing off against NC's best in Ponder and Melville last weekend.  He was stride for stride with them until they began to kick with 600 left, and then fell slightly behind. He could be in for a big day if he runs with that confidence tomorrow.

Kyle Durham (Weddington) is a guy we've been high on all season.  He's run 15:53 this season, and I think he should be in the mix with this front group.  Also Michael Zapherson (T.C Roberson) and Dwayne Lillie (A.C. Reynolds) battled to the line at the 3A West regional where Zapherson scored the upset.  Could they post another breakthrough tomorrow and break into the top 5? Similarly Frank Rushok and Jaxon Hudson's battle at 3A East came down to a lean at the line.  They ran 15:59, and will bring that confidence to Ivey Redmon tomorrow.

Weddington has a strong 1-5.  On the season the gap is just 26 seconds with their 5th man having a seasons best of 16:19.  They were really good from 1-5 early in the season, but at Wendy's and regionals one man having an off day cost them as they don't have the depth beyond their 5th.  Mount Tabor has the elite 1-2 in Cameron Ponder and Michael Moerk, and a 4th man in James Vlasis who has come on really strong at the end of the season.  He's the reason they beat Weddington at the regional level.  They need senior Charles Pace to come on strong tomorrow.  He's capable of running faster than he has this fall.  Chapel Hill has the depth even beyond their #7.  They're 7th man holds a seasons best of 16:34.  Having a chance to have 7 in before Weddington or Tabors 5th is big in a close team battle.  They're lead by seniors Ryan Combs and Nat Romaine who has run 15:37 and 15:39 this year.  Chapel Hill are the defending champions, and won't be looking to let another team steal their trophy.  This battles going to be wild tomorrow, and one team is going to go home devastated with a third place finish.