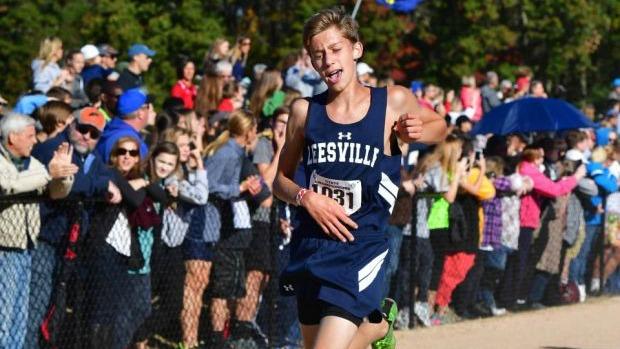 This is where the rankings get tough.  Leesville Road returns a monster team with a lot of young talent and can easily be just as strong as they were last season.  Losing Nathan Gamble and Caleb Petty will hurt, but they have plenty of options that will be able to step up for the Pride this season.  Ian Hixson is a rising senior and will be looked at to carry the load up front after running 16:26 last fall.  Hixson also clocked 9:53 on the track.  He also place 37th at the NCHSAA 4A State Championships last season in his first year in Leesville's top 7. Now more experienced in big races, I expect a lot of out him his year.

Zach Ohmann returns as LR's #2 guy after running 16:49 last year.  Ohmann squeaking into the top 7 last year when championship season came around, and stepped up to be LR's #4 at season end.  But Ohmann didn't run outdoors much, only two 800s at duel meets, so it's hard to predict what kind of shape Ohmann will come back in. Preston Jones was great on the track last fall running 4:31 showing he's got a lot more in the tank than his 17:17 XC PR and will be in contention to be Leesville's #1 this season.  Jones has been strong ever since his freshman year, and this breakout is certainly one they'll be expecting this year.

Where Leesville has an advantage is they have tremendous depth, and many options to run in their top 5 this season.  Matthew Falcinelli and Hayden Reed cracked he top 7 last year with PRs of 17:37 and 17:40.  Falcinelli clocked 4:41 for 1600m and will have hopes of being a consistent top 5 option for the Pride this season.  Reed did not run track, and had his last XC season cut short not competing through the conference championships.  So we won't know till we start seeing results form him where his fitness is at.

Where Leesville has the most potential is with their 2020 class, their top 5 guys rank out #5 nationally amongst last years outdoor track freshman class in the 3200.  Jack Fuhrer and Colby Crenshaw lead the charge with PRs of 10:15 and 10:19 respectively.  Andrew Macemore, Mac Jacobs and Jamal Mohamad also make up those 5 boys.  None of them did crack the final top 7 last season, so they'll need to prove they're ready to make a jump up to the varsity level competition.  Though, these are a huge asset for Leesville, and if these boys can develop this season as expected they'll be able to skyrocket up the rankings.  Quinn Conrad and Will Bell will also return as possibilities in influence Leesville's top 7 this season with track PRs of 4:51 and 4:53.  I really like this Leesville team heading into 2017 and certainly think they're going to be a force on the cross country course for the next few years.  It's going to be tough to qualify out of the NCHSAA 4A Mideast as a team this year.  They return as the 8th overall team in the region, but the gap from 4th through 8th is very tight.