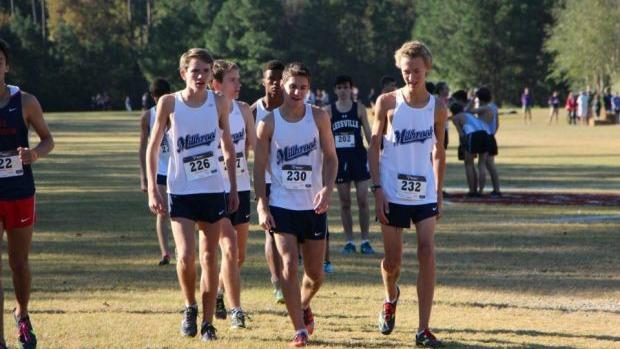 Millbrook had a very impressive cross country season last fall powered by the success of seniors Tucker Cera and Luke Gostling leading a deep junior and sophomore class.  Losing Cera and Gostling is a major hit for Millbrook, but they've developed a strong top three that dipped under 10 minutes this spring for the 3200.  Brothers and rising seniors Ryan Bennison and Andy Bennison ran 9:52 and 9:59 respectively and rising junior Nickolas Scudder clocked a 9:58.

The Bennison's and Scudder will be expected to carry a heavy load up front and produce some low sticks as a strong top 3.  Scudder was the top guy on the XC course last fall running 16:36 and was one of the most improved runners in North Carolina from 2015 to 2016.  Scudder ran 19:06 the year before.  Ryan and Andy hold PRs of 17:07 and 17:13 from last fall and I expect them both to shatter that this season.  They were very successful in the 1600 running 4:31 (Ryan) and 4:32 (Andy) and will come in with excitement to lead this Millbrook team in their senior season.

Beyond the top three Millbrook has a ton of options to fill out their top 7.  Rising Junior Banks Scudder ran 17:41 improving over two minutes from his freshman year.  Banks only runs cross country and didn't run track the last two years.  But his improvement last season was major and I'm sure the Wildcats will be excited to have him back in the mix this fall.  Nianza Msiambote focused on the middle distance events on the track and just capped off his track season at the Russell Blunt ECI last weekend.  Msiambote did come through when the team needed him at the 4A Mideast regional last season where he clocked a big PR of 17:26.  Thought throughout most of the season he was a non factor running in the high 18s low 19s.  But his end of season breakthrough could be exactly what he needed confidence wise for this fall.  They do have Josh McLean in their school who returns as a 1:58.41 guy in the 800.  He hasn't run XC before, but he Ould be someone who decided to give it a try his senior year.

Carter Bouchard is someone I think the Wildcats will rely on this season.  He was 6 seconds off his PR of 17:40 last season, but only ran in four races for Millbrook so it seems to me that something was up.  Bouchard ran 17:40 as a freshman and I think can certainly improve on that this season.  He shows focus on the longer distance events after running primarily the 3200 on the outdoor track.  The issue for Millbrook is going to be lack of depth up front.  They're top three looks to be solid, but if something is off with their 4th and 5th runners their team score is going to suffer.  They only return 6 under 18 and 8 under 18, so developing a strong and dependable 4th and 5th runner will determine their success this year.  One thing that'll be big for the Wildcats is moving from 4A Mideast to the 4A East this season.  Last year Millbrook certainly was a strong enough squad to compete at the state championship, but that region was so tough they were 8th place not that close to advancing.  This year they come into 4A East with expectations to be a top 4 team and bring a team back to the NCHSAA State Championships.