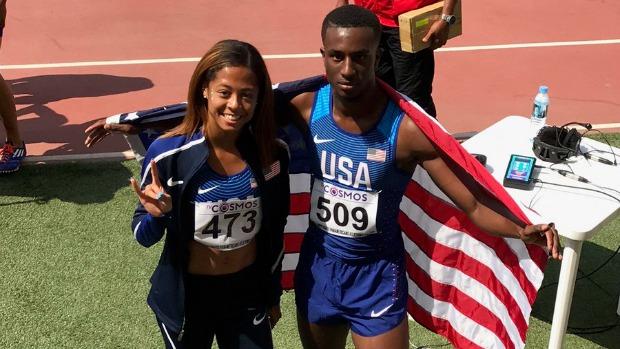 Cunningham's Girls 4x100 team ran 44.07 beating Jamaica's 44.92 with Canada earning a bronze medal.  Cunningham did not only have success in the 4x100, she took home an individual bronze medal in the open 200 where she took first place in her prelim heat running 24.09  where top three per heat and next two fastest times qualified for the finals. Cunningham ran faster in the finals clocking a 23.60 taking third overall behind Ashlan Best (Canada) and Team USA teammate Symone Mason (Florida).

To god be the glory! Thank you to the man upstairs for allowing me this opportunity and thank you to my coaches and family!:flag_us: #teamusa #wpn pic.twitter.com/YQT7sJQRMx

Charleston ran the second leg on Team USA's 4x100 that clocked 39.33 beating Jamaica who ran 39.74 with Trinidad & Tobago taking third.  Looks like all the relay success Charleston had with NC State this year paid off in a big way this weekend.  Charleston caps off an amazing freshman season with the Wolfpack and is certainly going to be a force on the NCAA level next season.

Daniel Estrada, competing for Puerto Rico, took 5th in 100m dash prelim yesterday running 10.71 giving him the fastest time qualifier to advance to the finals.  Estrada ended up taking 6th in the finals running 10.70 in his final junior competition.  Expect Estrada to be competing for World Championship Qualifying standards in two years (next year is a gap year for Worlds/Olympics).

Chantz Sawyers, representing Jamaica, ran 46.90 to get automatically advance out of his prelim heat in the finals.  Sawyers ended up pulling up later that day in the finals.  We'll see if he will run the 4x400 as scheduled for Jamaica tomorrow.

Dylan Peebles narrowly missed out on the finals in the 200 taking 3rd in his prelim.  The top finisher in each heat followed by the next four fastest times advanced to the finals.  Peebles was 9th overall with his 21.83 where 21.75 was the final qualifier for the finals later that day.