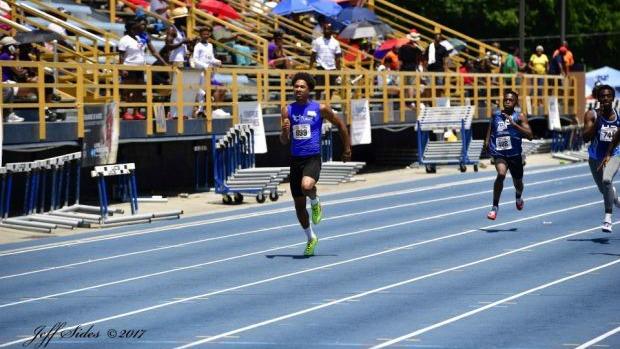 De'Shawn Ballard (Laney/Port City TC) had a massive day at the USATF Region 3 Championships, continuing a strong summer track circuit, with win in the 100 and 200 setting PRs in both of 10.56 and 20.95.

Ballard's mark in the 200 was wind legal as he becomes the first boy sub 21 this season and moves to NC#6 All-Time in the event under FAT timing and legal wind.

If you followed the high school season Ballard was certainly an unlikely candidate to be the superstar of the sprints during the summer track season as he was the 8th place finisher in the 100m dash at the NCHSAA 4A State Championships, and only had run one 200 at one of Laney's Home Meets.

Ballard revealed that he has had not one, but three hamstring injuries that have occurred in both his right and left leg.  He said the first of these were during a football practice in cold weather while doing sprint drills.

Ballard showed a lot of promise in the 200 clocking 21.28 at the USATF NC JO Championships earlier this year, but the wind meter read 21.23.  Ballard posted an impressive win against a strong field prior to winning the 200 setting a PR of 10.56 ranking him at NC#5 this outdoor season.

Ballard still has big goals for the outdoor season as the national meet gets closer over in Kansas at the end of July where he looks to bring two sprint titles back to Wilmington, North Carolina.

Below is an interview with Ballard after his outstanding 200m performance at the USATF Region 3 Qualifier.

Ballard recently graduated from Laney and will attend Appalachian State in the Fall where he will focus on track, and the Mountaineers are certainly pumped to add this talent to their up and coming sprint squad.