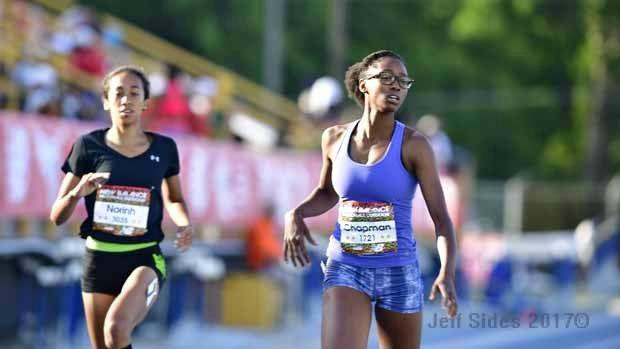 Roman Mitchell took 6th place in the Championship Boys Javelin with a throw of 199-10.  Mitchell holds a PR of 206 feet and is coming off an ankle injury.  All-American performance from the Junior!

Tamara Clark (High Point Central) clocked a 11.66 in her prelim heat to safely advance to the finals as she got the auto Q.  Clark finally set a new wind legal PR in the 100 running 11.46, improving on her NC#1 mark from this season.  Clarks mark is good for NC#5 All-Time under all conditions, NC#3 All-Time on marks with a legal wind reading.  Clark will be back tomorrow in the 4x100 Finals, 200 Prelims and 4x400.

Kiya Oviosun (Southeast Guilford) had a narrow second place finish in the EE Girls 200.  Oviosun clocked her second fastest time ever running 23.97.  Oviosun will compete in the fast section tomorrow in the Championship 400 where she holds a PR of 53.53.
Cedric McGriff (Providence) made the finals in the boys 110m Hurdles.  Over 4 or 5 hurdles McGriff was in contention to win before clipping a hurdle and losing track of his steps and falling on the next hurdle.  McGriff ends a very dominant senior year over the 110m Hurdles.  Interview above is with him on Friday after winning the Emerging Elite 110m Hurdles.

Akira Rhodes (Mallard Creek) had a break through performance in the Girls 100m Hurdles.  Rhodes won her preliminary heat giving her an auto spot into the finals running 14.02. Rhode clocked a big time seasons best and NC#1 performance of 13.67!  Rhodes is only a Junior and will be back to defend her indoor and outdoor hurdle titles next season.

Green Hope boys were All-Americans in the 4x800 taking 6th place in 7:43.  Thunderstorm came in before we could catch them for an interview.  They'll be back tomorrow morning in the 4xMile.

Parkland boys finished 3rd overall in the Championship 4x200.  Also qualified for the boys 4x100 taking 4th.  Lights Out TC in the results.  They'll look to finish as All-Americans in two relays.

Isabel Zimmermann (Reagan) won the fast heat of the Emerging Elite 2 Mile in 10:55, but took second overall due to the fast section running slightly faster.