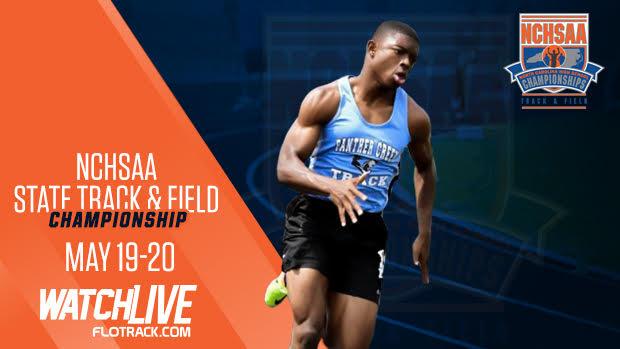 The 2017 NCHSAA Outdoor Track & Field State Championships will be LIVE through a MileSplit Universal Subscription!

The North Carolina State Championships will feature four classes of teams and athletes - Classes 1A, 2A, 3A, and 4A - competing to win the state championships in baseball, softball, and track and field. The scheduled events are as follows:

"We are honored to partner with the NCHSAA to live stream the upcoming North Carolina High School Championships," FloSports SVP of Global Rights Acquisition and Subscription Phil Wendler said. "This partnership provides us the unique opportunity to spotlight these amazing student-athletes, giving fans and family across the state and the world, live coverage of each competition."
NCHSAA Commissioner Que Tucker said, "We are excited to be able to showcase our Championships live through our new partner FloSports for those who are not able to attend. The athletes of the NCHSAA deserve to be in the spotlight, particularly during the pinnacle of their seasons - the NCHSAA State Championships."

To access the live coverage of the 2017 North Carolina High School State Championships for each sport, users must sign up to become monthly FloPRO subscribers on the respective site. An annual FloPRO subscription on any of the sites unlocks access to premium content across the entire FloSports network.

About FloSports
FloSports, the innovator in live digital sports and original content, partners with event rights holders and governing bodies to unlock a world of sports coverage that true fans have been waiting for. Through live streaming of premier events, original video programming, and weekly studio shows, FloSports is growing the sports, the athletes, the events and the fans. Current verticals under the FloSports header are Basketball, MMA, Wrestling, Track, Gymnastics and more.

About NCHSAA
For more than a century, the North Carolina High School Athletic Association has been the governing body for public and non-boarding parochial interscholastic athletics in the state of North Carolina. The NCHSAA has 409 member schools across the state's 100 counties and offers State Championships in 23 sports, with 90 team championships for men's and women's sports in four classifications of competition.