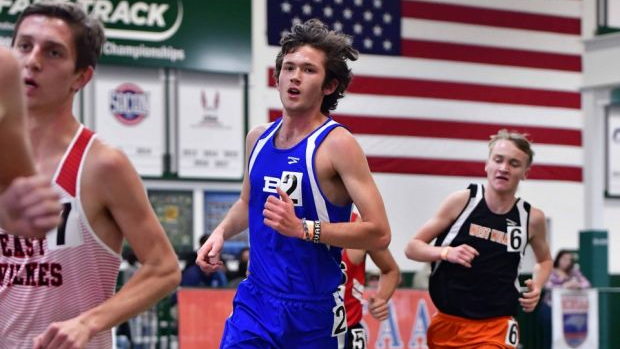 Andrew Robinson's high school running career didn't start off as most do.  Robinson didn't compete for a high school until the second semester of his junior year as he was home schooled for the first half of high school.  Robinson trained with the Asheville Trailblazers and coach Randy Ashley for his first two and a half years of high school.  During the indoor season of his junior year Robinson decided he wanted the high school experience and joined friend Noah Graham at Brevard.  The addition of Robinson has been huge for Brevard's program and they won the NCHSAA 1A/2A 4x800 State title in an epic last lap narrowly edging Croatan.

Robinson is better the longer the distance so far in his high school career and has three podium finishes on the track in the 3200, 2nd in 2016 Indoors, 3rd in 2017 Indoors and 3rd in the 2016 Outdoor States.  In his first cross country season with Brevard, Robinson was 4th at the NCHSAA 2A State Championships.  His progression in his 5K over the last few five is below.

Robinson has recently committed to UNC Charlotte and is very excited to join a young program that shows a ton of potential under Coach Alex Gibby.  He will join many former North Carolina athletes that are now apart of the program at UNCC.  Below is an interview with Robinson after the NCHSAA 1A/2A State Championships two weeks ago where he talks about his high school journey and what his running future has in store.