Defending Champion Connor Lane (Cardinal Gibbons) headlines the field, especially after his course record last week at Knights Crossing of 15:21. He will once again be challenged by Coleman Mitchell (Cary Academy) who had a big PR to finish second to Lane last week running 15:27.  Ben Savino (Apex) proved he was in phenomenal shape last weekend with a big win at Friday Night Lights over David Melville (Northern Guilford) who is also in this race, and has the third best PR amongst the field.  Todd Holbrook and John Tatter (RJ Reynolds) have hardly been challenge to this point in the season after dismantling the Jungle Run field a few weeks ago where they ran 15:32 and 15:33 respectively.  Grant Northcutt (Cosby, VA) comes in with a 15:29 PR from his season.  He holds a track 3200 PR of 9:25 and should be able to compete with NC's best.

Lanier Derbyshire leads a strong Broughton trio including Andrew Brooks and Stuart Holmes that has held out of racing until this point in the season and will certainly be ready to throw down this weekend.  Nathan Gamble (Leesville Road) is another guy who hasn't raced so far this season.  He missed out last week at FNL due to the SAT, but a teammate said he is in fantastic shape and ready to roll.  Gable and Wyatt Dershem (Cleveland) were just off the lead last weekend at FNL.  Last year Gable ran his PR of 15:28 at this meet where he took fifth.  Wyatt has started off the season very strong and has even beaten his brother in their first two races.  David Cart (Apex) was third last week at FNL, but something tells me that 16:01 doesn't serve justice to how great of a performance that was.  Right behind him was Tucker Cera (Millbrook) in 4th.  His 16:04 was 30 seconds faster than his 2015 time at FNL, he then ran 16:13 at adidas Challenge the following week so he should certainly be sub 16 this weekend.  Sam Grelck (Cardinal Gibbons) ran 16:00 at Knights Crossing last weekend, proving he should be in great shape to dip significantly under 16 on a fast WakeMed course this weekend.

Cameron Ponder (Mt. Tabor) once again will be waiting to debut later in the season, but his dad said he is thinking about tempoing the meet.

Broughton comes in as a near 100 point favorite based off the virtual meet, but Cardinal Gibbons looked really good last weekend at Knights Crossing, taking second to Green Hope.  Gibbons had a strong top 4 last week, if they can put a fifth together this weekend they could challenge the Capitals for the team title.  Broughton's top 5 comes in before most teams #3 and will be tough to beat.  RJ Reynolds has been the surprise team early on this season, and I believe this team has a lot more potential.  Cary Academy has had a strong top 3 so far this season, if they can close the gap from their 3rd to 4th and 5th man some they'll be able to compete with anyone this season.  Panther Creek is off a big win against their 4A rivals at Friday Night Lights, and I project they finish higher than their 10th place rank in our virtual meet.  Chapel Hill holds one of the tightest 1 to 5 gaps in the field with only a 33 second difference in their PRs.  We will see if pack running leads them to team success this weekend.  Millbrook was very strong last week taking 2nd at FNL over Apex and had a very strong top 4.

Out of state competition includes Blacksburg (VA) and Gonzaga College High School (DC).  Blacksburg comes in at #3 in the virtual meet, and placed 4th, behind Cary Academy, last weekend at Knights Crossing.  Gonzaga somewhat mirrors Chapel Hill's team with their 29 second gap between their 1st and 5th man.  Cosby (VA) has a strong top 3, but has a huge gap from their 3rd to 4th man, they come in at 8th in the virtual meet. 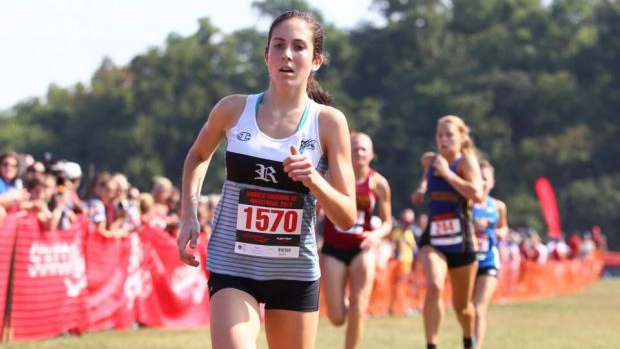 Nevada Mareno (Leesville Road) ran 18:04 last weekend at Friday Night Lights, and is your defending champion from this meet.  (Out of town on college visit). She will be challenged by Rachel McArthur (Patriot HS, VA) who holds track credentials of 2:06.55, 4:45 (Mile) and 10:19.  McArthur ran 17:16 at this course two years ago  to win NXR Southeast and go on to place 25th at NXN last season.

Rachel Northcutt (Cosby, VA), Samantha Marin (Blacksburg, VA), and Sophia Link (Blacksburg, VA) come in in the top 5 in our virtual meet.  Northcutt ran under 18 last year with a PR of 17:57.  Last week Marin raced against two NC girls in this field Isabel Zimmermann (Reagan) and Sarah Bodmer (Cary Academy) and placed 4th, just ahead of Bodmer at Knights Crossing.  Zimmermann is off to a hot start this season with two second place finishes at Providence Invitational and Knights Crossing.  Every time she races she seems to be improving and has her sights set on breaking 18 this weekend.  Bodmer seemed to have led a lot of the race at Knights Crossing and didn't have the top end speed towards the end.  I expect a very strong day from her this weekend.  Erin Spreen (Wake Forest) comes in with the 6th best PR in the field at 18:15. that she ran on this course last year.  Spreen has struggled some this season with her first race last week at Knights Invitational where she took 8th.  She didn't race at any of the early season 3Ks her team attended early on this season, and I suspect shes coming off an injury from the summers training.

Katherine Dokholyan and Clare McNamara (Chapel Hill) will look to provide low points for their Chapel Hill team this weekend.  This will be the first time we've seen Dokholyan this season, and she's coming off a strong track season where she ran 5:00 and 11:01.  McNamara was 3rd at her debut at Jungle Run just off of Janay Hall (South View) who is also entered in this field.  Hall has proved she's in much better form than in previous years and will look to improve on her 18:41 from two weeks ago.  I project a big race from Kate Eiselt (Myers Park) who won by a large margin last weekend at Royals Twilight.  She will without her team while they race at Hare & Hounds.

Their are four girls from Cardinal Gibbons to keep and eye on, Sloan Walter, Katharine Priu, Marissa Bishop and Annie Pierce.  Walter, Priu and Pierce were all in the top 10 last week at Knights Crossing and will be hungry for faster marks this weekend in a rematch against Blacksburg.  Bishop was 20th but has the best creditals amongst the group with her third place finish at NCHSAA 4A States last season.

Savannah Jones (Broughton) and Calli Parlier (Apex) had strong finishes coming in just behind Green Hope's team last week at FNL taking 7th and 8th respectively.  They should both be under 19 this weekend.

Blacksburg looks dominant in the virtual meet, but just last week they were just 5 points ahead of Cardinal Gibbons at Knights Crossing. In the same race Cary Academy was in third place ahead of Oakton by just 11 points.  The Chargers were without their #2 girl Emily Lane, if she is healthy and races than they will be right there with Blacksburg and Gibbons.  Chapel Hill comes in at third in our virtual meet making this an intense team battle amongst NC teams.  They have the best top 7 out of anyone in the field with their 7th runner coming in at 60th in our virtual meet, and a gap from 1-7 of just over 1 minute.  They are currently ranked #1 in our Flo50 Team Rankings because of this depth, and will make for an insane team battle.

Bethesada-Chevy Chase (MD), Patriot High School (VA), Oakton (VA) and Cosby (VA) are other out of state teams that come in in the top 10 of our virtual meet. Apex, Broughton, and Weddington will fight with these teams in what should be a very tight team battle amongst all the teams that place in the top 10 of this race.  Broughton girls were second at FNL last week lead by a 7th place finish by Savannah Jones finishing ahead of Apex by 29 points.

Other teams that rank in the top 25 of our Flo50 Ranking are Leesville Road, Reagan, Holly Springs, and South View.  South View comes in at 21st in the team score showing how strong this field really is.