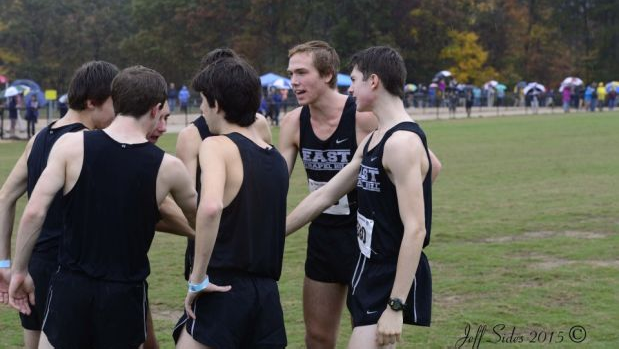 Normally when a team losses 4 out of their top 5 from the year before the significantly drop in the rankings, but this isn't the case with East Chapel Hill.  They graduated a heavy senior class of guys that have really been staples of this program over the last 4 years.  This year they return a young team with no standout superstars, but have a solid group of 5 guys that have a 31 second spread amongst their PRs.

George Hotelling has the best PR out of the group where he ran 16:46 last fall. Hotelling was only a freshman last year and ran 2:01 and 4:39 last year on the track in what seems to be a limited season with only a few races.  I would assume Hotelling could be the next star runner that East Chapel Hill produces.Chris Hassel returns with a PR just above 17 at 17:02,but the rising senior was able to go sub 10 in the 3200 in the spring.  He holds the best PR on the team as he ran 16:04 in his sophomore season at Wendy's  His track season indicates that he is ready to get back into that form this XC season.

2015 for Evan Owre was his first full XC season, where in previous years he only ran a limited amount of meets. Owre dipped under 17 at the conference meet last season to secure his spot in the top 7 going into regionals and states.  This season Owre will have much higher expectations from his team as he returns as the #2 guy and a senior leader for this relatively younger squad.

Will Owen is a guy who could have a lot of potential on the XC course.  He's coming off of a break out track season where he cut 30 seconds off his 1600 PR running 4:49.  He also ran 10:24 in the 3200 showing he's capable over the longer distances.  Tucker Owens and Ruben Sharp seem have to decided to focus on the middle distance events on the track, but have proven themselves to be solid runners on the XC course.  Both have PRs just over 17 minutes and will be hungry to break that barrier this fall.  Despite losing a lot this year, I wouldn't rule the Wildcats out from being a really strong team this fall!