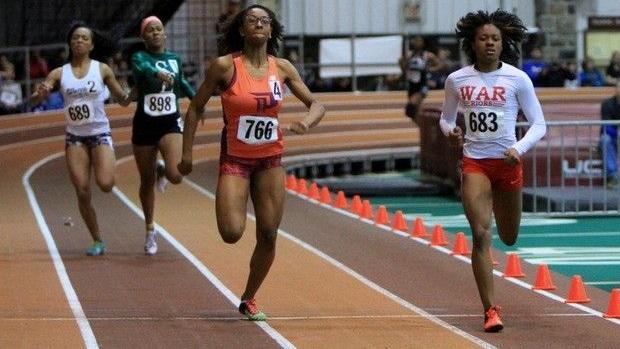 You had a sense this might happen.  Parkland's McKinley McNeill ran 1:14.04 at this meet last year, missing the North Carolina record by less than 2 tenths of a second.  Unlike 2015, when she ran away from everyone in the field, McNeill had serious competition all the way to the line this time around - VA's Brandee Johnson won the race by a scant 0.16.  That push was enough to get the Parkland senior well under the old record of 1:13.87, held by Tiana Patillo of Wakefield.  Johnson and McNeill ended up US #1 and #2 this season, so let's hope they square off at indoor nationals in the 400!

Boys Distance Runners Tear It Up!

And That's Not All!

As if the action on the track wasn't enough, one of NC's best field event athletes also got a new NC #1 mark.  Kenya Livingston (Rocky River) cleared 5' 7" for the first time in 2016, breaking up the logjam at 5' 6" and moving her up to at tie for US #3 this season!  With another inch, she can move into the top 8 in state history, and she still has several chances to accomplish that; after all, she's just a sophomore!