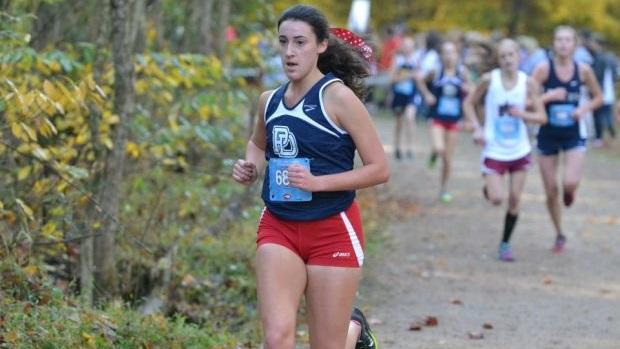 The team captain has been a major part of two state championship teams, even though she was never the one to earn individual headlines.

Running can be a family thing.  Any member of the family can be the one that falls in love with it, and then encourages other family members to get involved.  If you look at the rosters of cross country and track teams across the state, you'll see that nearly every team has multiple siblings, and on some squads you can see a huge family influence.

Samantha Huffman may have initially followed her brother into running, but now she's made it her own.  Ben, of course, was a nationally-known athlete for Providence Day and now runs for Harvard.  When his sister first decided to add running to her life, she wasn't a varsity-caliber runner, and she may not have been fully invested in it after spending most of her youth playing soccer.  Running has a way of growing on you, though, and before too long Samantha decided to fully commit, going year-round and making running a part of her lifestyle.  The results are apparent: after barely breaking 25 minutes and failing to crack the top 9 on her team as a freshman, Huffman has been on the Chargers' state meet squad for the last three years, playing an important role in 2 state championships.  Coach Ben Hovis speaks highly of his team captain, saying she has "an amazing work ethic" and referring to her as the "glue" of the team.  Her about Samantha's career in her own words below!