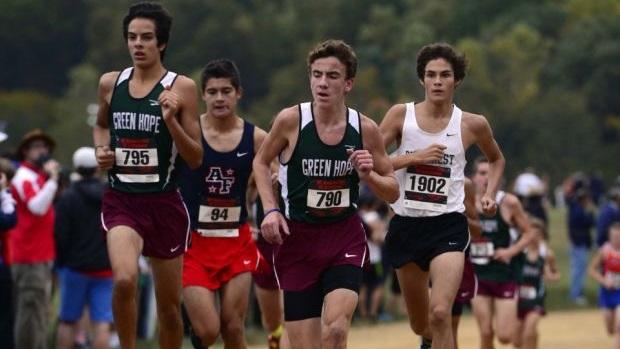 The Falcons dominated again, continuing a string of success in JV and underclass races, while the Panthers showcased their young varsity-caliber talent.

The 2015 NCRunners Elite Invitational was the biggest event in meet history, and it was also a huge success! The rain held off, the temperatures were perfect, and we had competitive battles in all 8 races. Most importantly, we learned a little bit more about some of the state's best teams and runners, we learned even more about the new NCHSAA state meet course, and we learned a LOT more about the top young talent in North Carolina. Speaking of which... 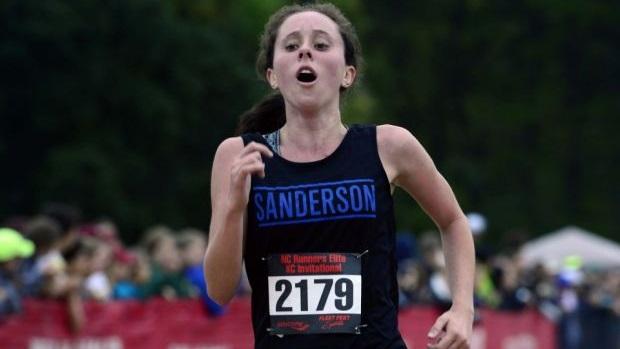 As it has been all season, the young talent on the Green Hope boys' team was on full display at Ivey Redmon Saturday. The Falcons put 10 runners in the Frosh/Soph race and dominated, scoring 26 and winning by 89 points over second-place Chapel Hill (and then they still had enough left to win the Open race, too!). Peyton Barish led the way, finishing as the runner up behind individual champion John Tatter (R.J. Reynolds) and leading 7 Green Hope runners in the top 12 overall. Tatter clocked 16:28.64 to earn the title of UNOFFICIAL JV State Champion, and Green Hope garnered the same honor in the team scores.

Normally, all the things we just said about the Green Hope boys would apply to their girls, as well, but this year the Falcons are just a touch thinner in terms of young talent, and they finished 5th. It was Providence that took home the biggest trophy of the meet as the UNOFFICIAL JV State Champion team, scoring 49 points to defeat Chapel Hill by 25. Sarah Parrish paced the Panthers with a 4th-place finish, running 20:10.49. The individual title went to Lauren Ammons of Sanderson, who ran 19:52.22 while holding off Grace Tate (Chapel Hill) down the final stretch. 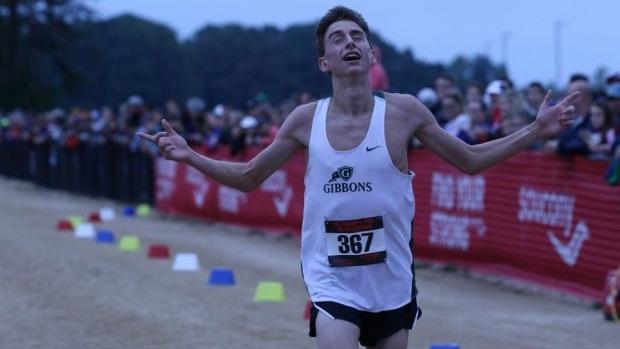 Nevada Mareno is the undisputed queen of the new Ivey Redmon course after taking her 2nd win in as many races there this season. In windy conditions, the Leesville Road junior ran almost the exact same time as she did at Friday Night Lights, clocking 17:40.28. When you put that in context, however, this time actually looks MORE impressive than her earlier result: back in early September she won by 11 seconds, but Saturday her margin of victory was 50, and she established her dominance early. Elly Henes finished second, running 26 seconds faster here than she has previously and helping power her Green Hope squad to the team title. Leesville Road finished a close second behind Mareno's brilliance, with Chapel Hill in third place.

On the boys' side, Connor Lane (Cardinal Gibbons) continued to cement his status as the man to beat the rest of this fall. He ran 15:22 on the more-challenging configuration to win by 12 seconds over Weddington's Mitchell Resor. Ben Savino (Apex) improved by 8 seconds over his Friday Night Lights time to finish 3rd, just barely holding off a strong effort from Alex Cornwell (Hickory Ridge), with Micah Pratt (Patriot Pacers) rounding out a top 5 that were all under 15:50. Weddington claimed a commanding team win, scoring 73 points to 169 for second-place Cardinal Gibbons, a squad that continues to look like a potential top-3 team at the 4A state meet.

Perhaps the biggest surprise of the entire meet was the VERY strong performance by the Asheville boys, who finished 3rd in the championship race with 200 points. The results came as a true team effort, especially considering the Cougars' normal #1 runner, Noah Shore, had a bit of an off day and finished 2nd for the team (35th overall). That suggests that Asheville has even more improvement possible between over the next month, and they now rank 3rd among 3A teams! Youngsters Davis Turner (10th grade) and Haven Honeycutt (9th grade) helped key the improvement for a team that we listed in the Honorable Mention section of our Preseason Countdown. 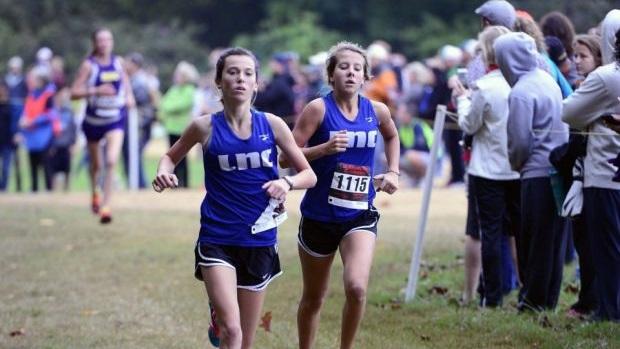 Can anyone or anything stop the Lake Norman Charter duo of Izzy Evely and Mariah Howlett? Aside from the fence around the Ivey Redmon staging area, which gave them some trouble just before the awards ceremony, they haven't been beaten once this year - one of the two has taken 1st place in every major meet in which they've competed. In fact, they're finished 1-2 in their last 3 invitationals, and the only exception to that pattern was a 1-3 finish at the Providence Invitational. Lake Norman Charter took a dominating win over 4A South Mecklenburg in this race, and continued to maintain their stranglehold on the #1 spot in the 2A team rankings.

Haywood Ferguson (South Mecklenburg) rose up late through the ranks of the day's first race, then powered to the front over the final 800 to take the win in 16:34 over Ethan Bemis (Northwest Cabarrus). The big story, though, was the continued success of Walkertown, the 1A state title contender that took down several 2A & 3A programs to win the race. Matthew Rogers led the way for the Wolkpack, clocking 16:48 to finish 5th. Topsail also had a strong performance in finishing 2nd, good enough to move them into the top 10 in the 3A team rankings, in fact.