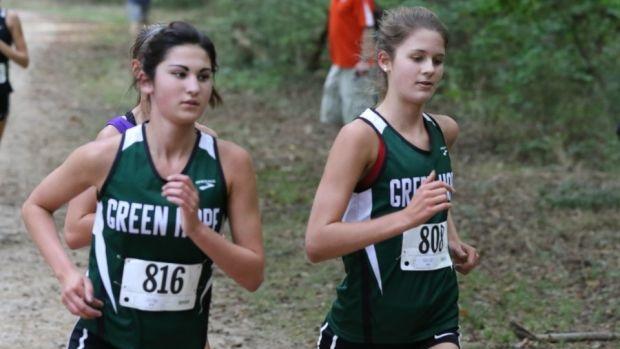 We haven't seen Green Hope's best yet this season. We should get maximum effort this weekend, but how will that translate on a wet course, and will it be enough to separate the Falcons from their contenders?

The 2015 edition of the NCRunners Elite Invitational is almost here, and it's the biggest ever! In fact, with the unfortunate cancellations of both Wendy's and Great American, this might turn out to be the largest meet of the season in NC. We have just under 3000 athletes from 100 teams represented in the meet, including some of the best individuals and squads from all around the state.

We just can't escape the rain! This will make it 3 straight weekends with precipitation, although this weekend will be much less eventful. (We are certainly thankful that most of NC dodged the worst of the rain last weekend, just as we are all thinking about our neighbors to the South this week.) The course at Ivey Redmon is in good shape despite the wet weather and the regular use it has been getting, although there are two spots that may still be a bit soggy for Saturday's race. Those spots are both in the first 1000 meters of the course: the lowest point on the first 800 before the athletes come back up to the main field, and the low point just before the athletes enter the woods. In the new layout, both of those locations are also on the final 1000 meters, albeit run in reverse.

If it weren't for the rain, the temperature would be perfect: a forecast high of 61 degrees signals that fall racing is here, but that's a bit chilly when you're wet.

At some meets, the 9-10 races are just a section of JV, but not at this one! The Frosh/Soph races are actually the featured event Saturday, billed as the UNOFFICIAL JV State Championship races. 2014 boys' champion David Melville (Northern Guilford) is back this year, but will he run with his school's varsity or attempt to defend his title? If he's in this race, he will be the heavy favorite, and he has already shown that he can manage a wet course. Two more top sophomores will definitely NOT be present, as they will be in New York (see below). That means Peyton Barish (Green Hope) could be the chief competition for Melville, or could inherit the favorite status if Melville opts for the varsity race. Benjamin Baxter of Grimsley could also be a factor in the front of this race. To nobody's surprise, Green Hope has the best depth among the freshmen and sophomores; the Falcons have been dominating JV races all season. Broughton also has strong young talent, and Chapel Hills' boys could make some noise here, too.

The top returner from last year's girls' race is Olivia Lackner (St. Thomas More), but the question of who will run here and who will run varsity is an even bigger deal in this race than it is in the boys. There are at least 10 9th- or 10th-grade girls that are in the top 7 of some of the best varsity squads in the meet, and any of those 10 could contend for the Frosh/Soph title depending on how the entries fall. That makes this individual race impossible to predict...but the team contenders are still very clear. Chapel Hill has great depth this year, extending to their youngest runners, and the Tigers will be favored here even with some of their top runners in the Championship race. Weddington has enough young talent to run for a trophy in this race, but that would include most of their normal top 7, so we'll have to wait to see how their coach decides to approach the meet. Likewise for Mount Tabor; the Spartans may decide to move their top youngsters up to the varsity race, but if not they will contend here. Providence and Cardinal Gibbons have their usual complements of good underclass runners. Although Green Hope's girls are uncharacteristically thin in the 9th and 10th grades this year (in comparison with past years, at least), you can never count them out of a JV race.

The best matchup of the day, and of the season so far, will be Nevada Mareno vs. Elly Henes. They've raced a few times this season, but in each case Henes has been held back to work on a predetermined pace with her teammates. Green Hope was scheduled to turn it loose last weekend at Great American, and hopefully they will do so tomorrow instead. Don't forget that Henes clocked 17:17 last fall! Mareno and her Leesville teammates were a late addition after the cancellation of Wendy's, and they will not be at full strength as a top 7 because this was not originally a scheduled weekend for them. Mareno is certainly at full strength, though, and we will find out whether her 17:38 here for Friday Night Lights was an all-out effort or not. It will also be interesting to see how well Brittany Stanley (Mount Pleasant) tags along with those two - she hasn't really been pushed in any of her races this season, and this is a great setup for her to break 18 for the first time. Also, keep an eye on Sophia Jantomaso (Patriot Pacers), a home-schooled athlete from Virginia that ran 2nd to Henes at the Greensboro Invitational two weekends ago, in much wetter conditions than what she'll face Saturday. Could this be the weekend that we see breakout races from runners like Blair Ramsey (Grimsley) or Alexa King (Marvin Ridge)? Both have been fairly quiet this season, but both have been under 18 in their careers.

In terms of girls' team scoring, Green Hope will get another shot at an upstart Chapel Hill squad that defeated the Falcons in the rain at Hagan Stone. Chapel Hill has a balanced, deep team with most of their top 7 back for next year, but they appear to be ahead of schedule and thinking about winning some things in 2015! With Leesville short a few top-7 runners, the Pride will likely be battling for 3rd with Marvin Ridge, Cardinal Gibbons, and Providence. Don't be too surprised, though, if one of the teams in that cluster breaks out and makes a play for the top 2. If you had to bet on which one, go with Cardinal Gibbons - they were missing Sophie Ebihara in the race where the rest of their squad set season bests, and that brings their performance in a virtual meet down just a bit.

On the boys' side, two of the top teams will not have their top 7 in the race, but there's a good reason. Broughton and Mount Tabor have both secured places in the Manhattan Invitational in New York City this weekend, so it's understandable that they would choose to run their second 7's here. That opens the door wide for Weddington, who our database projects as a strong favorite over Green Hope (and the Warriors would have been right in the mix even with Broughton and Tabor present). The really interesting part of this meet will be in the middle of the top 10, where several 3A and 4A contenders are trying to establish some momentum heading into the postseason. Providence is rated 3rd and good enough to threaten for a spot in the top 2, but behind the Panthers is a cluster of teams that are pretty even with each other. Cardinal Gibbons and East Chapel Hill are in the same regional, and either team could emerge from this meet with a leg up in the Midwest 4A. Jesse Carson, Apex, Asheville, and Chapel Hill are all state-meet caliber teams that have some question marks to address, and a good performance here could go a long way to building team confidence.

Individually, Connor Lane (Cardinal Gibbons) is the lone sub-16 runner in the state so far this year, but he did that on a dry course. Difference runners handle soggy conditions with different degrees of success, and we'll see how it goes for Lane this weekend. This is essentially a rematch between him and the Weddington duo of Mitchell Resor and Matthew Conner, who may want to pay back their loss from aXCC. If David Melville (Northern Guilford) opts to run in the championship he should be a contender for the top 5, as he has a history of strong races at Ivey Redmon and also runs well in wet conditions. Gable Dershem (Cleveland) and Miller Meares (North Raleigh Christian) renew their friendly rivalry, stoked by a close race at the Jungle Run, while Zachary Marchinko (Carson) is looking to get back into the top tier again after going through a small plateau in September (which could just be related to heavy training). Whether Lane pulls away or a 3-man lead pack forms, that second group of boys should be really fun to watch Saturday - and we haven't even mentioned Connor MacDonald (East Chapel Hill), Ben Savino (Apex), or Paul Arredondo (Cape Fear)!