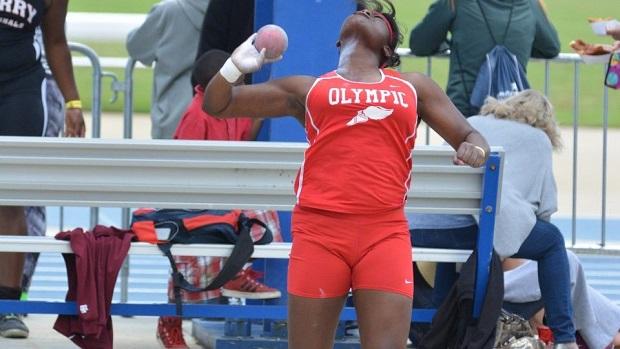 Khayla Dawson (Olympic) and Alycia Springs (Mallard Creek) both broke a meet record from 1981 in the girls Shot Put to highlight the historic Queen City Relays.

for the second straight weekMatthew Barrera (Butler) was able to narrowly able to hold off competitors at the line in the 1600. This week he was able to hold off Marquise McGee (Vance) and Joe Harbacevich (Myers Park). West Forsyth boys were able to lead the majority of the boys DMR, but Ty Sauerbrey was able to chase down the gap West Forsyth had formed to take his Lake Norman team to the top of the podium for the second time that day. Lake Norman also ran 8:11 to take that 4x800 earlier in the day.

Grace Sullivan(Providence) ran her first meet of the outdoor season and posted a dominating performance in the 1600, running 5:15 in a solo effort. She, along with Kayla Glova (below) also led Providence's 4x800 to a new meet record as they ran 9:31. The DMR was won by Lake Norman, Holly Bailey lead off and gave her team a lead that could not be made up. Mary Prouty(Myers Park) was able to win the 3200 in her final Queen City Relays with a time of 11:18. 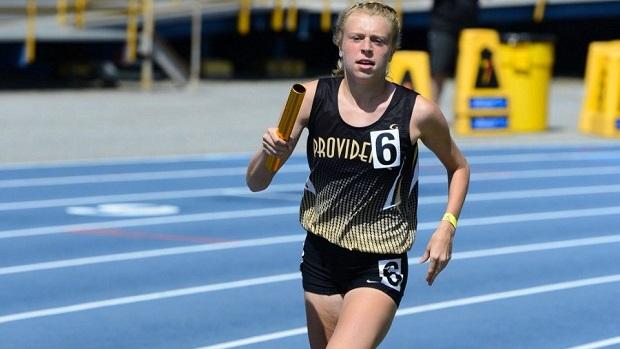 Gabrielle Cunningham(Mallard Creek) returned from racing at Raleigh Relays the night prior and was able to win the 100 meter dash and anchor their winning Shuttle Hurdle Relay. Her 100 time was 12.29. West Mecklenburg swept the 4x100 and 4x200 and finished second in the 4x400. Berry Academy won the 4x400 with a time of 4:06.36. Olympic girls were able to open up a lead and hold off a Providence team that made up a lot of ground as they won with a time of 4:19.45.

In the Shot Put a meet record from 1981 was broken by both Khayla Dawson(Olympic) and Alycia Springs (Mallard Creek) who threw 45-10.5 and 45-0.5 respectively. The two squared off once again in the discus, but it was Alycia Springs who came out on top throwing 140-09. The girls triple jump was a very tight competition as Mikaela Siebert(Cuthbertson) was able to take the win with a jump of 35-11.5, which only won by a half of an inch.