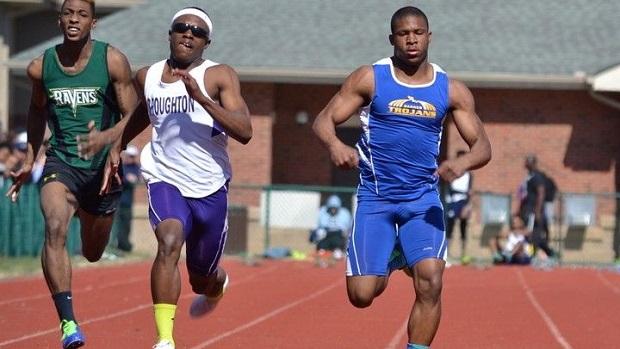 Garner's Nyheim Hines already led the returning rankings in 3 events, and he showed significant improvement during the winter season.

The season is just getting into swing, and it's time to look at the state's top talent! By consulting both the 2015 indoor rankings and the 2014 returning outdoor rankings, we can identify most of the state's stars - although there are always a few newcomers that have breakout seasons.

Let's face it - we might just be living in the golden age for these events right now. North Carolina is absolutely loaded with talent, and the state's top female athletes can hang with just about anybody in the country.

That brings us to perhaps the strongest events of all, at least as far as North Carolina's girls are concerned: the hurdles. Anna Cockrell (Providence Day) and Ebony Williams (Parkland) traded the title of the state's best high hurdler several times during the winter, and the issue has definitely not been decided yet. Williams is currently US #2 with her All-Time State Record of 7.81 in the 55 Hurdles, while Cockrell's 7.88 (which led the state for much of the season, and led the nation at one point) is currently US #4. Cockrell also sits at 8.42 in the 60 Hurdles, which is US #5 right now and NC #2 All-Time. Looking at 2014 rankings only makes the two seem even more competitive: Cockrell's 13.46 is US #4 Returning, while Williams' 13.71 ranks 8th. Let's definitely not forget to mention Gabrielle Cunningham (Mallard Creek), whose great start at the 4A Indoor State Meet led to a time of 7.87 US #3 NC # All-Time, and also pushed Williams to her state record. When you put that with her time of 7.04 in the 55 Dash, it's clear that Cunningham is poised to destroy her outdoor PR's! Cockrell is also North Carolina's best returning 300 Hurdler with her 42.68, NC #5 All-Time, but you have to think that Williams will challenge in that event, as well, after running 39.05 US #10 NC #4 All-Time for the flat 300 indoors. Finally, Ariel Davis (Platinum Sports) raced to a 7.90 in the 55 Hurdles, making her US #6 this winter despite being the 4th-fastest girl in the state.

Coming into the winter season, it seemed as if North Carolina would be a bit thin in the boys' sprints, especially in the wake of the graduation of national phenomenon Trentavis Friday. New talent has emerged, though, and some expected talent has improved, and now we find ourselves with quite a group of short sprinters to watch this spring! Nyheim Hines (Garner) was already the state's top returner in the 100 (10.52) and 200 (21.34), and then he went and blew us away with a three-week stretch indoors in which he ended up tying for US #2 in the 55 Dash at 6.28 NC #10 All-Time. Kinda makes you want to see how fast he can run the 110 Hurdles, where he is the state's #3 returner from last spring. We also saw the emergence of Rodney Rowe (Clayton), whose decision to focus more heavily on track paid off with a US #8 mark of 6.32 in the 55.

Sometimes you get to witness the actual moment when a star is born, and sometimes you can even see the moments that built up to that point. Up through the midway point of the 2015 indoor season, Dylan Peebles (Wakefield) was a short sprinter who was ranging up to 300 with some success. He ran fast enough to get an invitation to the David Oliver Classic 400 (in a year where North Carolina's talent base was a little down in that event thanks to graduation). He ran 50.47 there, winning the first section and placing 3rd overall, and that seemed to boost his confidence. The next weekend, he busted out a half-second PR of 34.53 in the 300 (over a second below his season best as of mid-January), moving him all the way up to US #12 and NC #8 All-Time. The state's top returning 400 runner is Ty Jaye Robbins (Piedmont), who clocked 47.49 last spring; he will be the best candidate to run in the 46's this year. For all practical purposes, T.J. Bleichner (Fuquay Varina) and Jayon Woodard (Southeast Raleigh) shared the state lead in the 500 this winter, as they ran 1:05.37 and 1:05.38, respectively. Woodard and Robbins are also both sub-22 returners in the 200.

Emmanuel Jackson (Sanderson) is the only returning high hurdler in the state that broke 14 sections last spring (he ran 13.93, which is the 7th-best returning time in the country). However, based on this past winter season's results, he won't be the only one to break that mark in 2015. Marcus Krah (Hillside), who ran 14.05 in 2014, currently sits at US #2 in the 55 Hurdles with his 7.24 (NC #7 All-Time). For his part, Jackson also ran well indoors, posting a US #7 time of 7.38. The best 300 Hurdler returning from last spring is Hines, whose 37.71 is among the top 25 returning times in the nation. That means the Garner senior enters the season as the favorite in 3 events, as well as having displayed improved explosiveness - that's quite a combination!