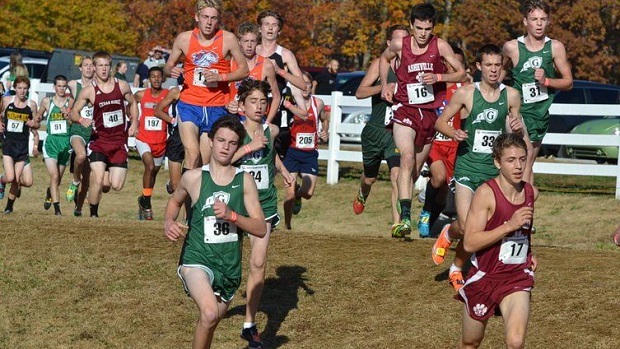 Four Crusaders, all together; now imagine these four all under 16 minutes, and you have an idea how good this team can be.

It's not often that a team can finish second in the state and legitimately say it wasn't the result they wanted.  After coming so close to winning in 2013, this team should be highly motivated to not just get back on the podium, but bring the championship trophy back to Crusader Nation.  The signs all point to a great season: the team returns their top 6 from last year, they had 5-man returning averages of 4:34 and 10:04 in the spring, and they've been one of the best-improving squads in the state over the last 5 years.  It's hard to find a weakness in the Cardinal Gibbons line-up; there's a bit of a gap between 6 and 7, but otherwise they project to have at least 2 guys under 16, with the potential (if everything goes very well) to put 6 in the 15's - after all, returning #4 Connor Lane ran 15:47 on the track at the end of the spring season.