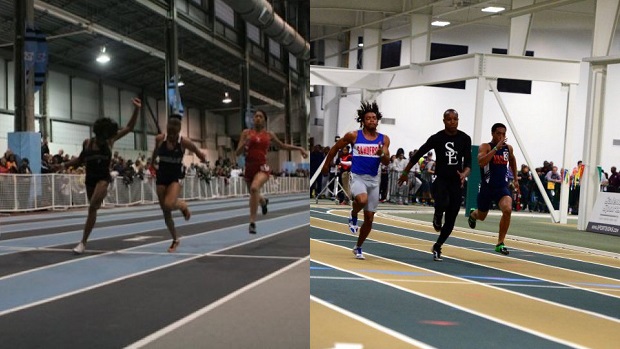 With major invitationals at both facilities coming up, it's time to ramp up the discussion: which facility is better?

During cross country season, we have a feature that allows you to compare the results of a meet from year to year (or to compare one meet to another).  While that particular trick doesn't work with track meets, as they have multiple events, the question is still valid: are all facilities truly equal?  For indoor track, it is already well-known that banked tracks can be faster than flat tracks (sometimes leading to separate rankings for each type of facility), and many colleges have built oversized indoor tracks that have wider curves and allow for faster running.  Both of North Carolina's primary indoor tracks - the Eddie Smith Fieldhouse at UNC Chapel Hill and the JDL Fast Track in Winston-Salem - are flat 200m tracks, and that should make for a fair comparison.  This indoor season provides us with a rare data set to compare the two tracks, with two meets at UNC that should have several athletes who also compete at the JDL, so NCRunners will provide a handful of articles on the subject.  Let's start with a basic comparison, as we head toward the first Eddie Smith Fieldhouse meet of 2014 this weekend.

First, some observations and anecdotal evidence.  Both of the tracks have relatively wide curves for flat 200's (if you've been to Liberty, you know what I mean).  UNC's are wider, though, and wider curves are generally easier to run - it takes less energy to turn, leaving more for forward speed.  On the other hand, JDL Fast Track has a more modern Mondo surface; older Mondo tracks seem to have been designed more for durability, whereas the newer material has been proven to be fast in international competition.  Of course, it's not just the track surface that matters, but also the runways.  Many coaches feel that UNC's runways are not great, that they sap energy from the jumper (particularly in the triple jump).  Aside from a perplexingly poor set of performances at the last invitational, JDL's runways have produced very strong numbers.  For example, in only two years of existence, the JDL Fast Track has already produced a better triple jump mark than Eddie Smith Fieldhouse did over the last 6 seasons.

In terms of their physical structure and amenities, the facilities could not be more different.  Eddie Smith Fieldhouse is renowned for its vaulted ceiling, which gives it a much more open feel (and the skylights brighten it up when the sun is shining outside).  The big downside is that UNC's facility is not dedicated to track and field, but instead serves multiple sports as a practice site; that means it was not designed for spectators, as its seating and bathroom arrangement clearly indicate.  In past years there was a large open space on the third floor where teams could camp out, but that has long since been filled up with offices, and now you have to step over people on your way to waiting in long bathroom lines.  Although its ceiling is much lower and it lacks some of the airiness and natural lighting, the JDL Fast Track provides a much better athlete and spectator experience.

So what do the numbers say?  Well, much of that is yet to be determined (look for more statistics in the future).  For now. take a look at the high school records for each facility, according to the MileSplit database (our data on Eddie Smith Fieldhouse only goes back to 2007, although the facility opened in 2001):